Next Thursday in conjunction with the ArtHole exhibition launch, local electronic duo the Eyeshadows will join us in the laser basement for a special live performance at 8pm. As they’ll be celebrating the launch of their debut EP, we caught up with Y.O.T.I. and Mark from the Eyeshadows to find out behind their sound and ethos…

How did Eyeshadows come into being?

Everything started from a simple loop, playing around with a voice processor and the band name EYESHADOWS. That was all we had. I think we both had an instinct for the type of band we’d like to be but nothing was set in stone. It’s been interesting seeing the band almost take on a life of its own. It’s all been very organic.

What one record from the others collection sums up for you the point where your taste converges?

MARK: I’d gladly take Dirty Sanchez’s Really Rich Italian Satanists EP from YOTI’s CD rack. I’m not a huge fan of electronic music as I’m more of sweaty punk kid, but I loved the electroclash/elektro scene from the early 2000s which YOTI introduced me to. It had an energy and attitude and sense of humour, which I feel electronic music often lacks. It wasn’t “funky” it was rough and I do like a bit of rough.

YOTI: Even if I’m not a great fan of what Morrissey’s turned into, I have to say that his first solo album Viva Hate is one of those mile stone records in my life. That’s one of the records that I believe means a lot for Mark too and we both admire his ability as a lyricist. It must be obvious to everyone that he was always trying to empathize or connect with his audience on an emotional level and that’s something to admire.

What are your individual musical backgrounds?

MARK: I’ve been a variety of bands since my teens. Singing, playing guitar and trying to be Kate Bush.

YOTI: I did a fine art installation around eight years ago about a fictitious pop star, so I had a go at producing some tracks for that without any previous musical knowledge. I wasn’t really happy with the results but I used them for the project which went really well. Four years ago when I had a bit of a break from the visual arts I thought of trying again as I go a bit loopy when I am not creating. This time it worked for me and I got really into it. I created a solo project and EYESHADOWS grew out of that.

You’ve been performing live for two years now, how come it’s taken so long for you to get in the studio and make your first EP?

We’ve been perfecting our art, slowly, carefully with precision.

Tell us how you came to work with photographer Kostis Fokas for the EP artwork….

We discovered his work on a variety of sites and fell in love. We felt what he was doing which in some way tied in with the music that we’ve been trying to make and so approached him to see if he’d be interested in working with us and were delighted when he said yes. Kostis is an incredible guy and amazing artist and we’re thrilled to be working with him. 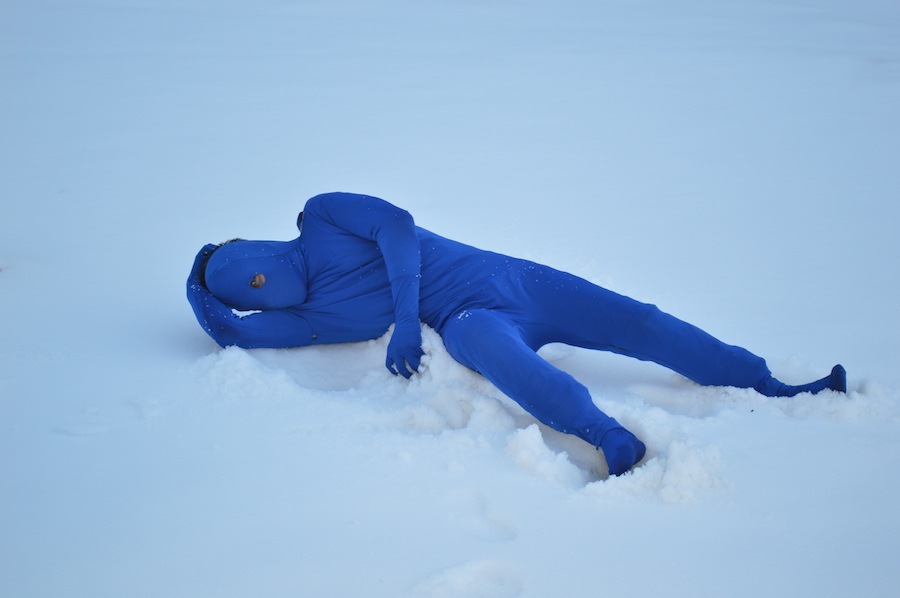 If you had a time machine and could go back in time to any dancefloor anywhere/anywhen, where would you want to go dancing?

Mark: Donnington Monsters of Rock festival 1995 in a mosh pit, at the front being squashed by 10,000 metal fans.

What will your live set encompass?

Why is it important to have a multimedia aspect to the Eyeshadows?

We think pop music is a visual medium and that all great pop music is linked to a strong iconic visual identity. When you begin to combine music and imagery or film you can create something incredibly powerful and that’s what we try and do. Whether that’s with the videos we’re producing or our performances. Some of the imagery we’ve used for our videos could be considered controversial, but we’re not intending to shock. Whatever we do, we do to strengthen the message and the experience of our music.

Sum up the EP in one sentence?

A friend of ours described us as sounding like “The best post-club shower sex you’ve ever had” so we’ll go with that.

Join the EYESHADOWS for their EP Launch at Dalston Superstore on Thursday 5th February between 8-9pm.