Our favourite happy-go-lucky homodisco HOMODROP is turning four this weekend and celebrating with an extra special party with headliner SONJA. We had a little chat with promoter Florian about the birth of HOMODROP, his musical inspirations and more.. 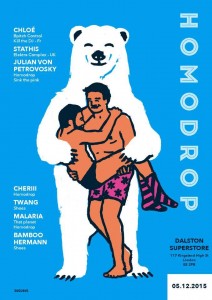 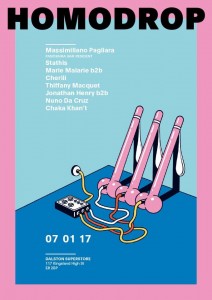 Hi Florian, for those of us that don’t know you as a promoter, can you tell us a little about what you do?

For HOMODROP I’m taking care of programming, building a line up, contacting DJs , agency, booking them and also taking care of all visuals . It’s is really important for me to have good music and good posters. Both are linked.

How did Homodrop come into the world? Was she an easy birth? A long, painful out labour of love?

Very fast actually, no pain hahaha! The party came out of the closet 4 years ago, in a Stoke Newington basement, on a sunny summer Sunday afternoon. For the first one there were only 2 DJs- STATHIS from DISCOSODOMA and myself. 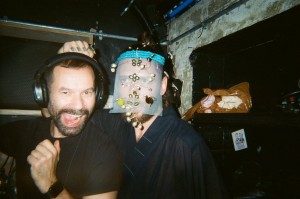 If you could sum up these last four years of Homodrop in one track what would it be?

That’s a hard one! I think I’d choose a track form MASSIMILIANO PAGLIARA who played last year for us, called I AM DISCO .

If you could pick any guest, dead or alive, to headline one of your parties, who would it be?

Can you tell us a little bit more about SONJA, your headliner for this edition?

We met playing together in Lisbon where she’s been really shaking up the underground electro scene in the last year. She has her own label called Labareda, a resident for LUX and hosts a monthly radio show on the famous Radio Quantica. On top of that impressive CV she is very funny!

What were your earliest musical inspirations? 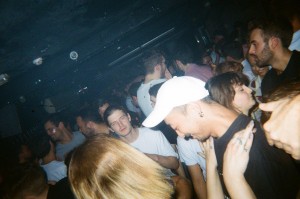 You’ve got all international of late, Homodropping  in Canada, France and Portugal, where you now live, what’s that been like?? 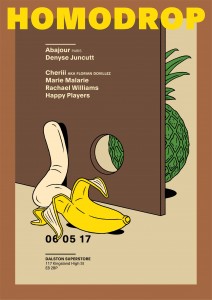 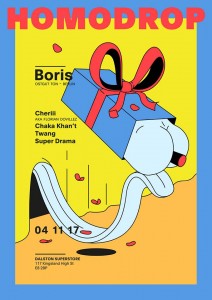 If you could be any animal crossed with another animal, what would you be an why?

I can imagine myself a mix between a bee and a stingray.

What track would you use to describe this creature??

Have you got any exciting ideas for the future of Homodrop at DSS?