We are having a spacial Superstore SMS Warm Up Party in conjunction with Body Talk! Come and dance with us this Saturday 19th May with special guests Hannah Holland, Rory Phillips, Nadia Ksaiba & Mikki Most alongside Rokk and the Body Talk Residents. We can’t promise sea & sunshine but there will definitely be an abundance of excellent music on both floors to keep you on your feet!

Once again we are doing a boat party and the beach bar and we can’t wait to get uber-cosmic in the sunshine.

Peep the latest poster for the full line-up… 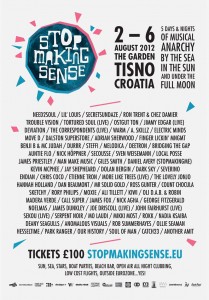 We’ve still got a few special Superstore tickets for only £90 so grab them whilst you can and then join the Facebook event for Stop Making Sense.

And if you just can’t wait that long for a bit of Severino then pop down to his night Severino And Friends here at Dalston Superstore on Saturday 24th March from 9pm to 3am.

Chris is an extraordinary DJ with serious house heritage – an early affiliation with Sheffield’s game changing WARP led to his formation of SWAG in the ’90s and a string of awesome records for dancing to. More recently he invented the wonderful Popular People’s Front label; re-imagining secret classics for modern dancefloors. He also runs the exceptional All Ears vinyl record distribution company which is responsible for getting the output of independent labels (including Golf Channel, Merc, Noid, Disco Deviamce, Cynic and C.O.M.B.I) into discerning record shops around the world.

In his own words (i.e. cut & pasted from his biog) “in 1989 I got my first residency. I learnt the art of making people dance, and putting records together, a skill I have employed to avoid a day job for over 20 years now.”

DB: Why has Sheffield got such an affinity with electronic music?

CD: Anything but that question!

Right… sorry! You are resident at the superb Idiots Are Winning party. Can you describe the music you play there?

Depends what time of the night I’m doing really – but loosely speaking it’s the kind of set I’d pack if I was DJing in a little pub with the extended friends and family, mixed up with a handful of brilliant new things, some classics and a few swerveballs. I was very aware when I agreed to do it that I wanted it to be unpredictable musically, although having said that I listened back to me closing the last event and I’m doing a very convincing impression of a very predicatable, drunk acid house wedding DJ.

What does the name mean?

You’d need to ask Jake and Louis [Idiots Are Winning promoters] who do all the hard work for the party. I wholeheartedly agree with the sentiment is all I know.

Why do you think that analogue-sounding house music is making a comeback?

Seems fairly obvious that if you throw enough immaculately produced, soul-less and personality free digital dirge at people, they’ll start seeking out an alternative. Some of the naively constructed and early ‘trying to do disco on drum machines’ tracks coming out of mid-eighties Chicago are still the ones that people ask about. House isn’t – and shouldn’t be – too complicated.

‘I Really Do Believe’ and your collaboration with Luke Solomun on the rebooted Classic are big Rhythm Connection favourites… what other releases have you got coming up?

I tend to potter about in the studio less and less these days, the distribution company is demanding a lot of time, and I think I’ve always had the best results when I store up lots of inspirational samples, scribbled notes and ideas over, what have become longer and longer periods of time, then pull them all together in quick sessions. I’m in the middle of this process now, so might have something new done for next winter!

Anything that lets you record and manipulate a sample – stealing is believing !

After a worrying dip vinyl seems to be making a comeback… Why do you think that is?

Hard to be specific as I think the reasons vary amongst different age groups and music enthusiasts. Certainly a backlash against the digital thing, in terms of club music I think people were made to feel like relics for buying records when the bigger digital download stores really took hold, but gradually the market has opened up again, not least because there seems to be more and more stuff that is vinyl only. There’s a financial imperative that exists when you’re releasing something on vinyl, which isn’t there for labels operating in a digital only world, this impacts quality control massively I think. When we set up All Ears five years ago it was at the time when larger distributors were going bust, everyone thought the writing was on the wall for vinyl, but out of sheer bloody mindedness and no business acumen to speak of, combined with completely unwarranted optimism, we made it work!

What is your favourite SWAG record?

If I’m totally honest I think our best stuff was the remixes…The Metro Area & Shuffle Inc ones are two that seem to endure.

We strongly advise you to purchase this brilliant SWAG care package from DJ History.

As we mentioned back at the beginning of the year, we’ll be joining Stop Making Sense Festival out in Croatia this August, alongside some of our favourite people like Durrr, Trouble Vision, Ostgut Ton, Warm, Electric Minds and more. This week sees the first lineup announcement from each crew that’ll be curating part of the festival and all we can say is WOW!!! This year looks set to the best year yet with a high calibre of artists from classic names like Lil’ Louis, Chez Damier and Ron Trent, to underground heroes like Steffi, Deetron and Move D.

We’ll be bringing Superstore bosses Dan Beaumont and Mikki Most, plus Hannah Holland (Batty Bass), Rokk (Body Talk) and Nadia Ksaiba (Rhythm Connection) and keep your eyes peeled because we’ve got even more tricks up our sleeve yet to reveal!

“Not too close to the stages so you cant hear yourself sleep, yet within crawling distance to all the action!“

We’ve got a few £90 Early Bird tickets left so grab one while you can. And it’s worth bearing in mind that the closer we get to August, the more expensive the flights get…

To get a taste of Stop Making Sense, bop along to their launch party with Chez Damier on Saturday 17th March.

Stop Making Sense Festival 2012 will be held at The Garden, Tisno, Croatia from 2-6 August. For more info visit: stopmakingsense.eu