An excerpt from 'Life as a Unicorn' by Amrou Al-Kadhi, AKA phenomenal Iraqi-British drag queen Glamrou 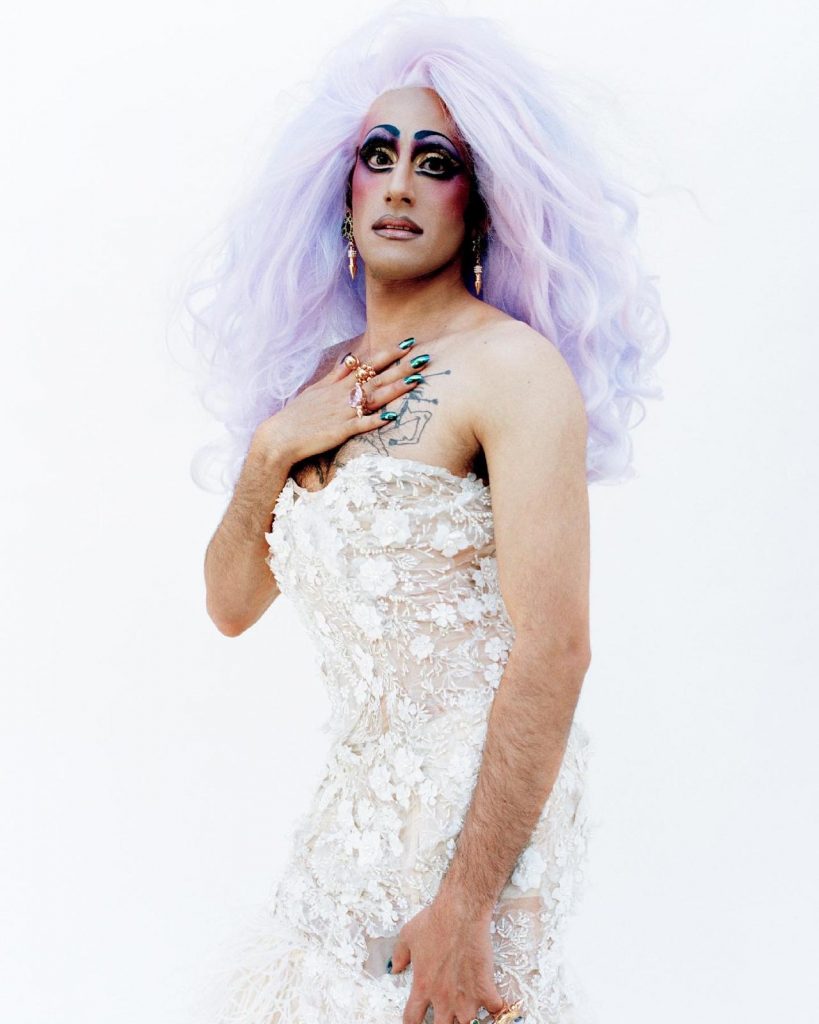 Amrou Al Kadhi AKA Glamrou (they/them)
For the twenty-fourth night that August, I found myself crossed-legged on the floor of a damp, pungent dressing room. As the rumblings of an Edinburgh crowd reverberated from the venue next door – I say venue, it was more like a cave – I used my little finger to apply gold pigment to my emerald-painted lips. Denim, the drag troupe that I set up seven years earlier, had survived the gruelling Fringe Festival, and we were one show away from crossing our scratched heels over the finish line.

A month of performances, often two a day, had taken its toll. My skin was at war with the industrial quantity of make-up it was being suffocated in (a 2-hour procedure each time); I had obliterated my left kneecap because of a wannabe-rockstar ‘jump-and-slam-onto-the-ground’ move I felt impelled to perform each show; and a boy I was seeing had suddenly disappeared on me (I secretly hoped that death, instead of rejection, would be the explanation, but it turns out he was a ghost of different sorts: he had indeed stopped fancying me).

Despite feeling so weathered, I was itching to get onstage again. I always feel empowered when I’m in drag and entertaining a crowd – it’s my sanctuary, a space where I invite the audience into my own reality, where I don’t need to adhere to the rules of anybody else’s. No matter how low I’m feeling, the transformative power of make-up and costume is galvanising; for most of my life I’ve felt like a failure by male standards, and drag allows me to convert my exterior into an image of defiant femininity. This particular show was always exhilarating to perform, because it was the first time I honestly articulated my tumultuous relationship with Islam onstage, trying to mine humour in the unexpected parallels between being queer and being Muslim. How I haven’t been hit with a fatwa yet, I do not know.

A student volunteer usher told us we were moments away from the start of the show, and I did my pre-show ritual where I box with the air and shout ‘it’s Glamrou, motherfuckers’. It comforts me to imagine my haters as the punch bag ‘motherfuckers’. Then I formed a circle with my other queens, our hands all joined at the centre in a moment of communion. The synth-chords burst through the speakers, and the audience whooped as we strutted through a blackout onto the stage, our backs facing the crowd, pretending that the actual sight of our faces would be some sort of reward. A suspended beat, then lights pummelled the stage. I thrust my arms above me as if it were the Superbowl (I won’t lie; it usually is in my mind), and eyed the dripping condensation coating the cave wall, one drop a moment away from plopping on my face. After a prolonged and hyperbolic musical introduction – allow a queen her fifteen minutes – the show began with each of us turning to face the crowd one by one, until I pivoted around last. The next part was supposed to be me proclaiming ‘I AM ISLAM’, followed by the Muslim call to prayer remixed with Lady Gaga’s ‘Bad Romance’.

But on this final night, as I opened my mouth to start the show, I felt a little bit of sick at the back of my throat, and I found I couldn’t make a sound. Six Muslim women, the majority wearing hijabs, were sitting in the front row. There, looking directly up at me, were multiple avatars of my disapproving mother, about to remind me how shameful I was.

The ensuing performance was about as fun as your parents walking in on you having sex, and then staying to watch until you come. For a section in the show I sang a parodic ‘Why-Do-You-Hate-Me’ type number to my ex-boyfriend – but the boyfriend I was singing to was Allah. Throughout the routine, the women in front of me were using Allah’s name in a more God-fearing way – ‘Allah have mercy’ (in Arabic) seemed to be the most common refrain. Another highlight included a sketch in which I compare mosques to gay chemsex orgies. When I dared glance out in front of me, the mother of the group seemed to be repenting in prayer on my behalf. I started to ricochet around a mental labyrinth of paranoia, the censorious voices from my childhood chattering loudly in my mind. As my past enveloped me, the empowering armour of my drag began to dissolve rapidly. I stumbled over my lines, tripped on my heels – more than once – and even welled up onstage (which caused the eyelash glue to incinerate my cornea). The rest of the drag queens – as well as the audience – were white, so it felt as if the Muslim women and I were operating on a different plane of reality from everyone else, one where only we knew the laws.

Once the show finished, I sprinted backstage and threw up in a bin. My agent knew something was up and ran to the dressing room. I trembled as she hugged me, distressed at the offence I knew I’d caused. I felt like I was fourteen again, when my parents would tell me on a daily basis that my flamboyance was the root of their unhappiness. I’d worked so hard to create my drag utopia, and until that night, it had been my haven.

And then came the news I was dreading. The women, waiting outside the stage door, passed on a message to the usher: they wanted to see me.

Like a reincarnation of my teen-self, I shuffled off outside, with all the strength of a young seahorse adrift on an ocean current. Seven years after drag had liberated me, I was about to relearn that my liberated new identity required disciplinary action.

There they were, all lined up. The mother of the group, who was dressed head to toe in Islamic robes, stared down at the floor, refusing even to look at me. Great, I thought – she thinks I’m Satan. She whispered something in Arabic to her daughter that I couldn’t make out. As her daughter began speaking, I twitched with terror, like a defendant in court about to learn the jury’s verdict.

‘My mom’s super Muslim, yeah, so she’s a bit uneasy, but she wanted me to tell you that she thought you were amazing, and that you should be really proud.’ Not guilty. In my dumbfounded jubilation, I went to hug her mother, who quickly shifted, like a pigeon does when you suddenly kick the pavement.

‘Easy – my mom’s from Saudi Arabia and really Muslim, so she can’t hug you – but she thought it was so cool seeing a gay Muslim on a stage like that. She said she feels really proud to have been here.’

I explained how I believed they were cursing me throughout the show. It turns out their expressions were akin to a colloquial ‘Oh my God!’ uttered out of enjoyment. The young woman then held my hand, stared honestly into my eyes, and said: ‘But your song to Allah’ – fuck. Guilty on some counts – ‘it broke my heart. I’ve been there. Trust me, I’ve been there – I’m a woman living in Saudi Arabia. But the thing is, Glamrou – Allah loves you.’

Life as a Unicorn: A Journey from Shame to Pride, and Everything in Between is available now at all good book stores! 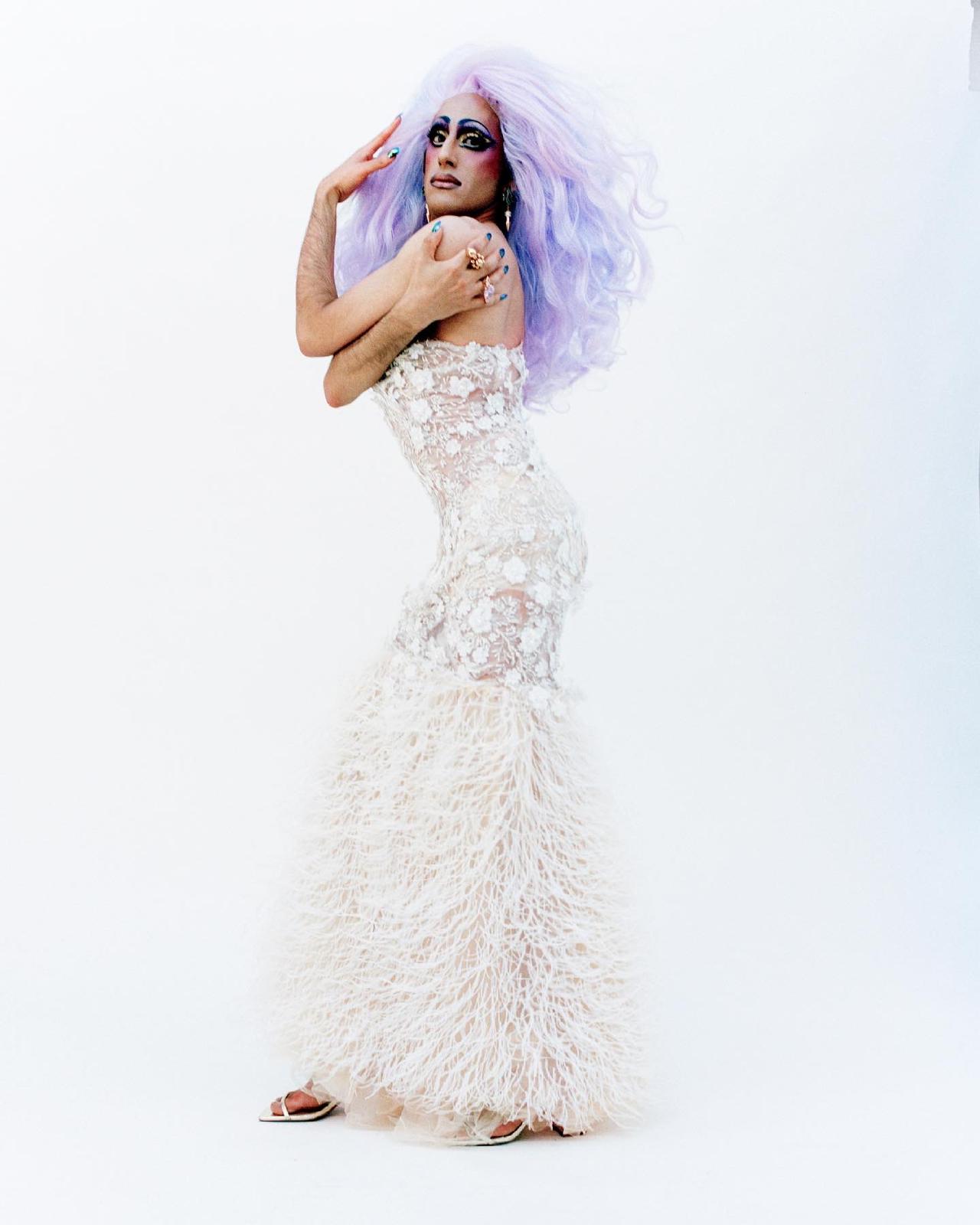