Actual New York legend DJ Lina joins us at Dalston Superstore next week for a 2-day residency spanning the lesbian delights of Clam Jam on Thursday 5th February with resident DJ Cathal, followed by Pecker on Friday 6th in the laser basement alongside the Duchess Of Pork and Gibson (Grizzle host upstairs).

As the long-time resident DJ at Sip N Twirl in Fire Island Pines, a summer resort for NYC's LGBT community, Lina Bradford knows a thing or two about making people dance. And so we're taking advantage of her current winter sojourn here in London and getting her behind the decks two nights in a row! Ahead of her mini-residency we asked her a few questions about her hometown, her performances as Girlina in the '90s and more!

How does one get to be the undisputed Queen Of Fire Island?

I find it funny to have any labels attached to me, ‘cuz when jew know me I am So Not That Gurl! I guess it’s because I came during a time when love and positive light was needed. The Island was very dark after the AIDs scare and morning parties, so people pulled away, and then in 2005 there was a new beginning… and me!

How much would you say Fire Island Pines has changed since you first went in the late 80s/early 90s? For better or worse?

Well it has changed a lot; I did have a huge part to play on that. For one, John Whyte, the OG back in the day, in the ‘70s and ‘80s was racist and didn’t like women or trans or drag queens… And so the birth of the 4th Of July event that is today known as The Invasion! Then when he died Eric [von Kuersteiner] and Tony [Roncalli] bought up everything and that’s when I brought life to it, as there was never a High Tea before, and that was also the birth of Lina’s Lounge.

You're originally from Manhattan and have lived in NYC most of your life correct? Do you think people have a tendency now to romanticise New York's gay scene in the '90s? Or was it really that amazing? Tell us the truth please Miss Lina...

Yes, born and raised, so I have seen and done it all! The ‘70s and ‘80s amd YES early ‘90s were EVERYNESS!!!! The early ‘90s were the last good times of what I considered to be the end of NYC, till about ‘97ish. Now it’s very Middle America and not edgy at all! No artist can afford to live there and they have to move outside the city, NYC is a Dorian Gray of what it used to be, it’s sad!

Talk us through an average night at your night Twirlina at Sip N Twirl? What make it special?

What makes Twirlina so special to so many, including myself, is its COMMUNITY! Love and respect, there is Low Tea, Middle Tea and then there’s Twirlina! It’s Thursday through to Sunday, with a different vibe every night, as I have to make the music and visuals different for myself, or no one is gonna feel it if I am not!

Haha, so Thursday is Rewind Thursday- all ‘80s and my spin on ‘80s… it’s THE SHIT BABY! Friday is Lina’s Lounge- soulful house. Saturday is GBOGH! That’s Go Big Or Go Home! Bigger sound, factory beats. Sunday is TBS- Throw Black Sunday. Klassics All Klassic Disco. It’s the fact everyone comes upstairs as it’s all outside on a huge outdoor deck that’s packed and my DJ booth is in the center, everyone kisses and hugs me and takes photos. It’s just simply otherworldly and ALL LOVE!

And what brings you to the most expensive city in the world, LONDON?

What I love about Londouge is the feeling of old skool, jew all keep it so real and recognize good music! And culture! And always push it and keep it current!

What's your Number 1 tip for maintaining a flawless public persona?

By ALWAYS keepin’ it 100% baby! I Love Love Love people and positive energy!

Is the DJ Lina shower curtain the best bit of DJ Lina merchandise or  are there more amazing gems out there? 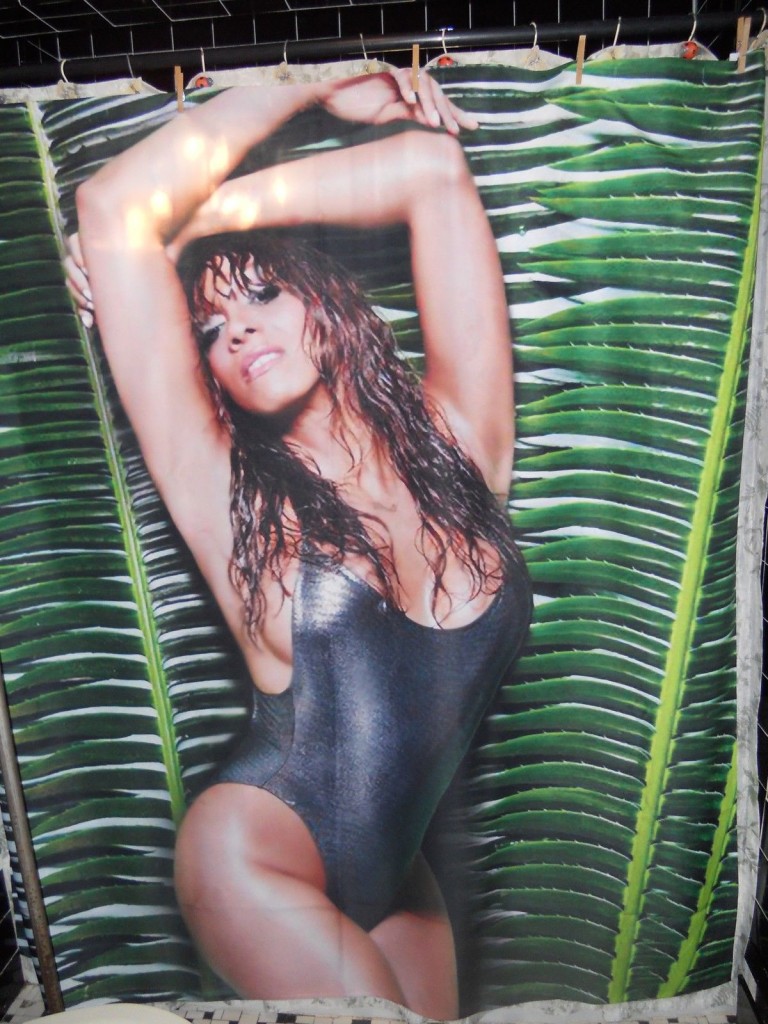 Haha there are DJ Lina t-shirts we do every year when I shoot the posters In March… the shower curtains came from those. There’s even a line of jeans on the way!

What's one record people might be surprised to learn you know ALL THE WORDS to?

Not really any more but most may not know I am a huge klassic rock chick. Led Zepplin is MY EVERYNESS! I have everything and know every song to everything haha! LOVE THEM, PLANT ROCKS!!!!!!!

Your performances (and especially your dance moves) as Girlina are legendary in New York, what was the most memorable?

WOW, jew all did yo’ HOMEWERK! Girlina, wow haha! I would say The HX Awards… HX was a huge magazine that was around forever, it just folded a few years back but it was ‘92 I think and Girlina did Feel What Yo Want by my friend Kristine W. Junior gave it to Girlina and she put that song on the map and BROUGHT IT 2 LIFE! And herself and she won Best Performer of 92.

My lewk: it’s klassic fresh faced with a 1940’s vibe and a mix of ethnics and preppy!

And finally, share with us your signature dance move...

Well back in the day it was The Drop And Kick and Queen of The Runway! Now it’s a lil shimmy hahahaha!