Homodrop’s guest for this Saturday night is the fabulous Ketia. Ketia has a new found sense of belonging behind decks and feels very grounded in the underground happenings of Lisbon a keen ear for new and exciting music, alongside a curious, invested approach to community- building within the Lisbon club scene; insists on mixing as many genres as possible with a promise of bangers only started as coatcheck girl at queer rave mina where she debuted and rose to resident and tech bitch.

Founder and co-organizer of trans focused collective Kit Ket – a subversive crossover between a rave and a house party in a non consistent sonic narrative a crystal clear mission on bringing honesty to the table as a gateway to bliss on raving. 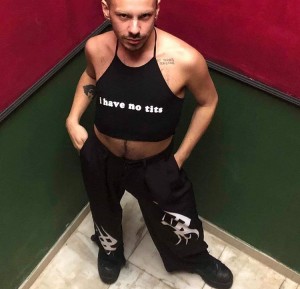 Can you describe yourself in 3 tracks

Rihanna – Pour It Up

What can we expect for HOMODROP?

How your party Kit Ket was born?

Kit Ket was born out of a time where mina was all there is: a strobey smoke infused atomic bunker where you couldn’t see anyone really. It was amazing. You had to focus on the music.

But i felt the need to do a party where the purpose was to see your friends in a pretty colorful setting with uplifting music. So i did.

Quickly turned into a bitch party where techno isn’t welcomed: the only thing asked of the DJs, anything but techno (we’re not technophobic, we just feel like there’s enough techno focused parties going around).

Tell us more about Lisbon scene

But a community was build. A real loving one.

Genuine loyal ravers with the sole purpose of togetherness come to all of the editions like it’s the first time.

Lisbon or Berlin ? And why?

It’s different. Lisbon is home, is family. I’d be comfortable being in pijamas at one of my parties. That’s how comfortable it feels. Because there’s no parties, when there is one it is euphoric and messy and radical.

People need it. There’s an urgency in the music and in the crowd.

Clubs don’t want raves. We’re doing illegal parties in secret locations and there’s no law inside. It gets wild.

Berlin raving comes with a structure. It’s wanted there so there’s way more to go around.

As someone who does the mostly only two queer regular raves in Lisbon, it feels good to go somewhere where i can just party and not work for once.

When it’s good in Berlin it’s better than anywhere else.

But i must admit most time it feels underwhelming and the euphoria gets watered down to nice occasions in nice locations but rarely rememberable as something mind bending.

Shoutout to Lecken who always surprises me and keeps me on my toes both as a raver and party doer – a true sexy and sexual party where queer is real and so is love.

And to Mess and Mala Junta as well – both done by the boss Hyperaktivist who brings fem power and rave to the club every time.

These are the few parties where i felt cared for when something went wrong. And most of all, felt like the party wanted me there.

Catch Ketia in the laser pit at Homodrop this Saturday!