Get ready for the London debut of both the fabulous Gloria Viagra and her amazing clubnight Partysane! Known as the Empire State Building of drag, she is Berlin's premiere drag superstar, and she come to make bank holiday Saturday AMAZING. Ahead of the party, we caught up with her to find out more about her, her fave queer hotspots in her hometown, and what London can expect from Partysane...

Drag queens with impressive facial hair is totally zeitgeist right now. Why do you think the public is embracing that so much?

Is my moustache that impressive?? Haha, just kidding... Big hair was always loved by the crowed. And by the artists, of course. Big wigs can tell fairytales, thats why.

Conchita Wurst publicly named you as like a sister, alongside Gaga and Drag Race creative director Mathu Anderson... who do you think of as your sisters?

My sister in crime and everything is the one and only Sherry Vine from New York. Tittsisters, as we use to say... but also the legendary Joey Arias, most of the Berlin girls and yes, sister in beard and heart is Conchita..!! ?

What was your first drag experience? Or, if that's too personal a story, could you tell us about your most memorable drag moment?

Honey, as far as I remember I am born in sequences... there are two moments:

1. One was in the finale of The Voice Of Germany when Robbie Williams came up to me, climb up the chair next to me (to reach me...) sung for me and... then he kissed me, the drag with moustache!!! In front of the whole TV nation..! 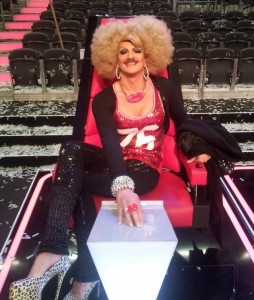 When did you know you were actually Queen Of Berlin? Or is it just something you were destined for?

Honey, I come from a quite anarchist family, we don't need a Queen!!! But it was quite a way to get where I am now... and a lot of wild parties to deserve the title Queen of Berlin Nightlife, hahaha!

How did Partysane come about? Where/when was the first and what was it like?

I was asked to do a party in SchwuZ. I wanted to bring a new queer crowd there and so I started PARTYSANE three and a half years ago. And it became just what I wanted, and a big insane success with great DJs and live acts from all over the world.

And what can we expect from the Partysane London debut?

Well, I really hope London can go even more nuts then Berlin!!! Terry Vietheer and I have booked a great mixture of DJs, so proud about it.. And A Man To Pet and me together will explode the DSS... aaaahhh can't wait !!!! ?

What are some of your fave queer parties? You do seem to have a wealth of choice in your hometown of Berlin!

You're known as the Empire State Building of drag!! How tall are you in heels and weave and will we fit you in the DSS laser basement???

Mama Moustache is 7,4 tall give or take. I'll take the ceiling down if I can't walk head up...!

Who was your drag mother? Who are your Berlin children?

We never really had this tradition of drag mother before, it just came up some years ago... but the wonderful Gérôme Castell (which was nearly beaten to death last autumn just for the great person she is) is my Drag Mum... she made the way for a lot of queens!!! And my girrrrlz are Sally Morell and Fixie Fate. They're doing their way, I am quite proud.

Gloria Viagra, please tell us, what is your top tip to living a life as fun and glamourous as yours?

Be yourself, respect the others but give a shit about conventions... Nothing is more glamourous than a heart of glitter!!

Join Gloria Viagra for her London debut of Partysane on Saturday 23rd May at Dalston Superstore from 9pm - 3am.