Bank holiday Saturday sees Handsome, east London's best celebration of uplifting house and hot men welcomed to Dalston Superstore for the first time! The heads behind Handsome, Martyn Fitzgerald and Toby Grimditch, sent us this sizzling promo video to share so we posed a few questions to them about the ethos of the night, their fabulous posters and more...

What's the ethos of Handsome?
Martyn: Handsome is about the house/techno that came out of New York, Chicago & Detroit in the '80s and what has grown out of that since.
Toby: We grew up in some of the most amazing clubs ever to hit London, which are now long gone and to be honest nothing ever replaced them. Handsome is our salute to that... bring all kinds of people, be them gay or straight, black or white etc into a space where they just want to dance & have FUN! The best house music (which people LOVE to dance to) and lots of up for it happy faces.
Why did you originally decide to have it at Visions Video Bar?
Toby: Visions has its own special recipe that I think won me and Martyn over from the start, underground and a little dodgy (in a good way). Handsome is not about big pretentious 'look at me' spaces... it's about getting down to it!!! Dalston Superstore is somewhere you can actually get sweaty as a betty!
Martyn: 'Cos it's a got that proper just-taken-over-some-random-basement-and-put-a-soundsystem in feel/80s vibe - it's even got black and white tiled flooring! And Eddie who runs it is wicked, he's been there since before most of us were drawing breath and is a total local diamond.
How will you expand the music policy now you have two rooms to play with here at Superstore?
Toby: Downstairs will continue the Handsome 'strict' house policy of US house, whilst upstairs will give the chance for Martyn to showcase his DJ skills (he is actually rather good and his music - there is a compliment coming here - Hold Tight...... He has great taste in music). So expect all sorts... good party music that will make you wanna ask Martyn for his phone number!???
You also aim for "hands in the air house". Where will your hands be- in the air or on the decks?
Martyn: Um, mine will be on the decks when upstairs and in the air when in the basement.  Or clutching a drink.  Or giving some poor bloke a massage asking him what's his name and where's he from...

Toby: As Martyn will tell you... I still got moves at 76 years of age!

What's been your favourite Handsome poster so far and why?
Toby: The first will always be very close to my heart... for many many reasons. The excitement of doing that first party was electric & the whole production of it including shooting the artwork and watching those bloody Facebook numbers go up will stay with me all my life!
Martyn: I have two: the one of our friend Jesus [see main image], as he looks so happy and natural and the kind of Handsome we were after... not about a six pack and bubble butt, but just an ordinary guy comfortable in his own skin.  The other one is of Liz Bisoux - it's a really beautiful portrait shot. 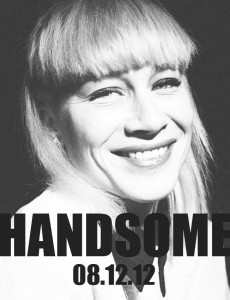 Who is a Handsome icon?
Martyn: Carl Craig. Maybe one day...

Toby: The face of Handsome is everyone who passes through the doors and dances to the music that we showcase. But for me the ultimate Handsome Icon was our first poster boy Dominic... He was a big inspiration for me and the Handsome brand.

What 1 track (each) sums up the night for you?

Toby: Only one track comes into my head... The System - You Are In My System (Kerri Chandler remix), it's THE Handsome song for me.

Join Martyn & Toby for Handsome this Bank Holiday Saturday 25th May at Dalston Superstore from 9pm - 4am.