This Friday our favourite loose cannon PATSY invites you to her Third Birthday! Headlining this glitzy affair is the absolutely fabulous Jacob Meehan!

A thoughtful DJ and passionate organiser of functions, Jacob Meehan has played everywhere from Smart Bar (Chicago) to Panorama Bar (Berlin), worked behind the counter at Chicago’s legendary Gramophone Records, and now roams about:://blank for 48+ hours straight each month when Buttons, the party where he’s both resident and program director, delights all of queer Berlin.

Ahead of his hotly anticipated set at PATSY, resident DJ and booker Whitney Weiss caught up with Jacob to talk about summer songs, anti-fascist protests, and floating music festivals.

Hey Jacob! You’re a resident DJ and program director at Buttons, a great monthly party that combines creative artist bookings and queer debauchery in Berlin. What is a song that embodies the energy of Buttons for you??

Before Berlin, you lived in New York and in Chicago, where you did the Men’s Room parties and were a resident at Smart Bar. What record makes you think of your time in Chicago?

I’ve heard you play everything from house to freestyle to ambient sunrise music to techno. What would you say is the most surprising or unexpected record in your collection??

This track from Mr. Bungle’s California album has been stuck in my head, which harkens back to my teenage days as a closeted, stoned, angsty Midwestern nu-metalhead.

This is your second time at Superstore (thanks for your set at Les Poppeurs a few years ago!) What is a song you’re looking forward to playing late night in the laser basement??

I’ve got lots of fresh stuff from friends and colleagues from all over the globe, which I love being able to share. My former co-worker at Gramaphone Records, Ike Release, just gave me some lush unreleased material, and Will and Nita from The Carry Nation inboxed me a great new vocal house track. Plus new cuts from Buttons residents Shingo Suwa & Stanley Schmidt.

Berlin has been blessed with a lot of sunlight this April and May. What record is your favorite to listen to at home when the windows are open, a breeze is wafting in, and you’re relaxing??

What’s a song you wish you had written?

Have you heard the latest track by John Roberts? I deeply admire everything that he does.

Do you write music ever, and if so, what’s it like??

I just uploaded a few house tracks to my Soundcloud, which I made with Garrett David ( Smart Bar/Lobster Theremin).

Recently you participated in what looked like a beautiful and successful protest against the far right AfD (Alternativ für Deutschland) in Berlin where the music community outnumbered the fascists. I saw that you were DJing at one point. What sort of songs did you play, and what was the day like?

Clubbing is one of Berlin’s biggest industries, so to see the scene self-actualise and come together to politically organise against the far right was beyond powerful and necessary. 70,000+ people showed up in the streets to stand up to the AfD, and show them that they are not the majority. The day was a beautifully colourful, peaceful, multi-generational protest soundtracked by a number of trucks rigged with sound systems. Buttons collaborated on the QUEER BLOCK with Riot, Pornceptual, Herrensauna, Gegen, Cocktail d’Amore, Members, GDay, and Room4Resistance. It was honestly one of the most important things I’ve ever been a part of, and it was such an honour to be able to play for an hour. My personal highlight was getting to drop Robert Owen’s 1987 classic Bring Down the Walls just a stone’s throw from where the Berlin Wall used to be. 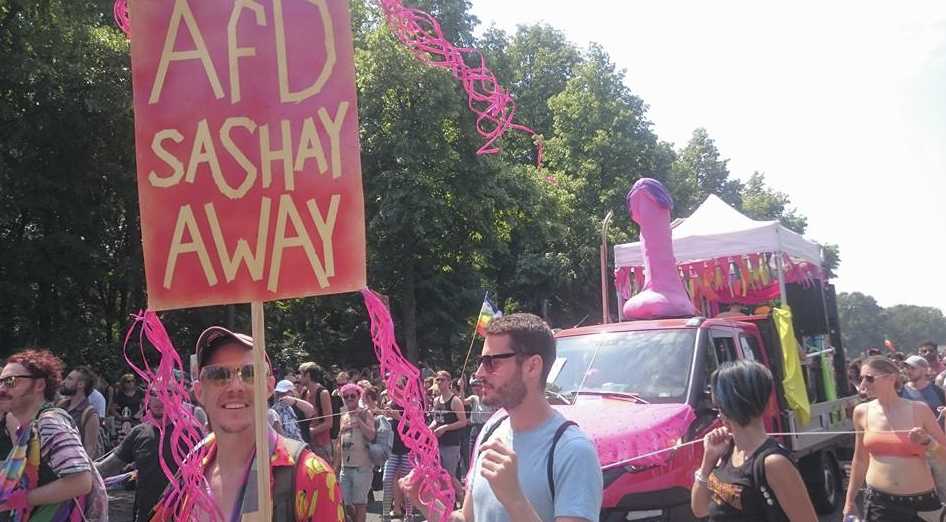 You’re one of the organisers of Whole Festival, which is bringing together Buttons, Discwoman, Unter, Horse Meat, Cocktail d’Amore, and more on a peninsula at Greimminer See. What’s a record you know you’ll want to play there, surrounded by friends and community??

I think I’m slated to play before Eris Drew on Saturday night before the sun sets. Our stage will be floating in a lake, which is a former quarry, now flooded. I anticipate soundtracking the transition from light into dark, probably through Bezier - B2 Teleconférence.

What was the first record you ever bought? Where did you buy it?

Babe, we’re gonna love tonight by Lime from Gramaphone and Try Again by Aaliyah off Ebay.

What song have you always wanted to hear someone else play out so you could dance to it?

All Night Passion by Alisha!