2018 looks to a a year of radical new nights taking the reins at Dalston Superstore, and Femmi-Errect is our brand new night to celebrate femme energy and radical softness kicking off this February! It is the brainchild of queer multi-platform artist Katy Jalili, who has been lighting up stages from The Glory to the RVT and as far afield as Berlin! An alumnus of both Duckie's Homosexualist Summer School, and Carnesky's Finishing School, they are well-versed in subversive queer political performance and we can't wait to see what they unleash as a curator and promoter at Femmi-Errect! We caught up with them to chat queer utopia, Lady Gaga and plans for 2018!

Hi Katy! We are very excited to have you soon for Femmi-Errect! Can you tell us a bit about the night?

Yes! It's going to be a celebration of femme-identifying people. We have an amazing lineup of Femme DJs who will bring us awesome party tunes, all the variety from from 90s RnB to Riot Grrrl and Punk. It’s a night to celebrate femme energy and radical softness.

The theme  of the night is Soft Femme. There will be artwork from Liberty Antonia Sadler, and video art from Felix Kawitzky. There will be a queer kissing booth and overall cuteness and femme love.

The reason i wanted to start this night was because I’m sick of femme-phobia/racism/transphobia in LGBTQ spaces, so I want to create a space where all the queer people who feel unwelcome at gay bars are welcome at Femmi-Errect.

You are an alumnus of both Duckie DHSS and Carnesky's Finishing School – how did both of those program shape you as a performer?

They were both very significant learning experiences for me. I'm so lucky to have been taught Cabaret by talented powerful feminists such as Ursula Martinez and Marisa Carnesky, especially when there's a massive lack of non-male performers in this scene.

Duckie was what really shaped my confidence as a performer, but also my confidence as a queer person. I remember the day I got accepted to do their Homosexualist Summer School, and felt so validated as a queer, as if I needed someone to give me a letter of acceptance to the community, and Duckie pretty much did that for me.

I also learned a lot from Marisa, I felt very empowered by her to make work about survivorhood and sexism, which has always been a big part of my performance work.

Can you tell us a bit about your drag alter ego Eton Mess?

Eton Mess came out of my frustration with white male privilege. I realised that when certain white rich men look at me, they too see the level of division between us, and there is always an uncomfortable feeling for both of us for various reasons. Eton Mess basically clowns the ideas of whiteness, masculinity and class privilege. He's a rich white boy who thinks he's hot shit, but he's actually pathetic. I guess he's not really an alter ego because I'd never desire to be him. He gives me the chance to really make fun of oppressions I experience and say, "You'd like me better if I was white? Okay then I'll cover myself in cream and meringue.” 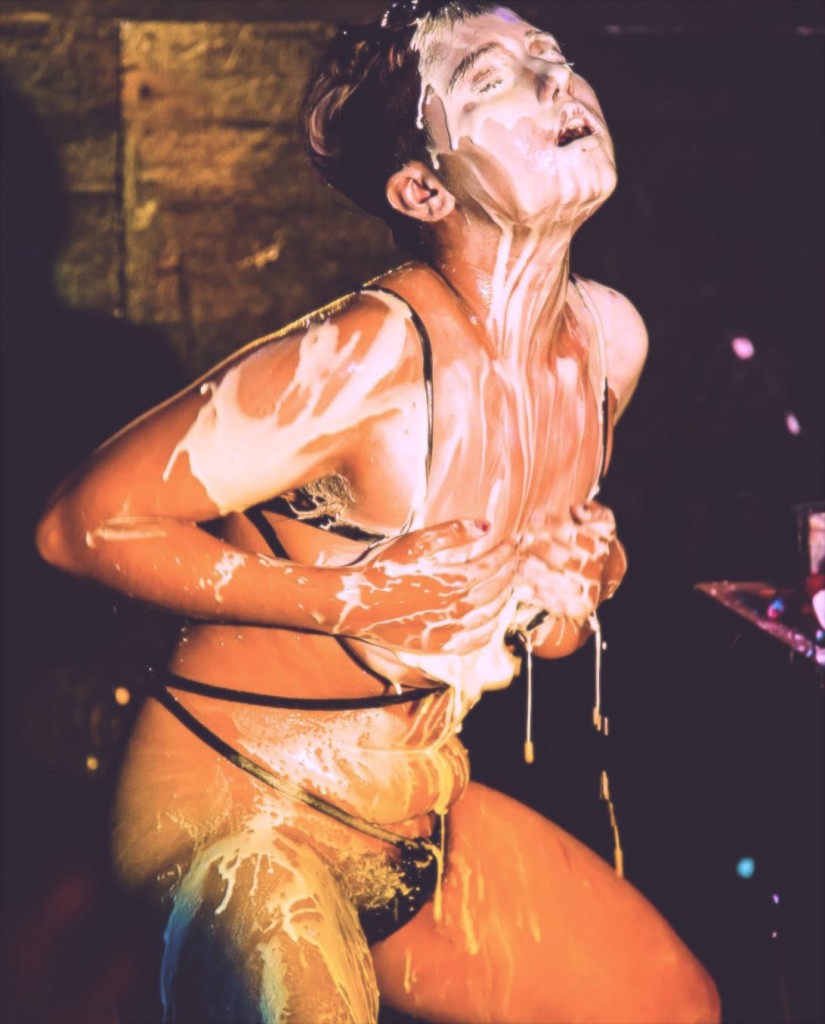 Sometimes I plan for ages in advance and calculate everything, and sometimes it only takes for something dramatic to happen to me like an argument at a pub or an embarrassing date and I use performance as a platform to express those experiences.

I’ve been a resident artist at Bar Wotever, which takes place at the RVT every Tuesday. It has been a very amazing opportunity for me to develop and showcase new work every month.

A lot of the time I just want to express how I’m feeling that month and what I’ve been struggling/dealing with, so I'd think of a look or a significant colour, and then think of music that inspires me, and a lot of the time it's about improvisation on stage and trying things out and letting yourself make mistakes and being open to feedback.

If you could change one thing about the LGBT clubbing scene in London, what would it be?

To make more spaces for women, more spaces for trans people, more spaces for people of colour. For event producers to really take diversity on board and open up spaces for new people to do those jobs. I really want there to come a day that I can go to my favourite club and dance all night, get drunk and not have to worry about the fundamentals of oppression, which frankly takes the fun out of clubbing!

We also need more zero-tolerance policies at venues, so people know that if any issues arise they can be supported, so they feel safe. 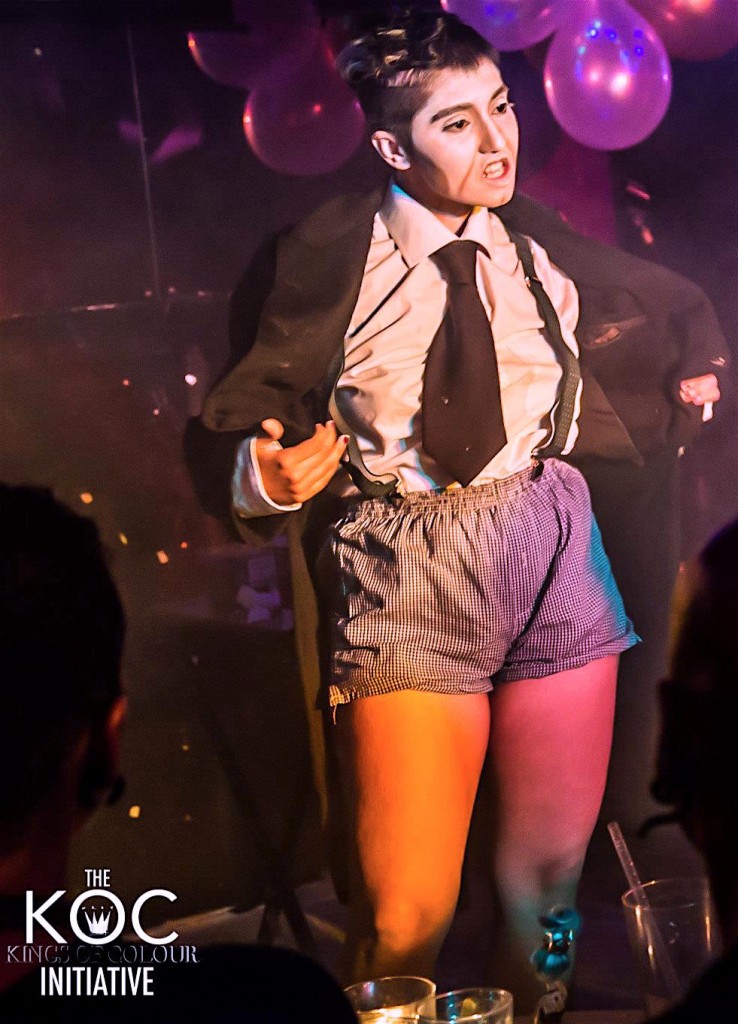 Who are some of your favourite local queer performers?

I have always loved David Hoyle since I discovered him, and It’s been such a pleasure to perform with him in the past year.

I also absolutely love Rubyyy Jones, she’s an amazing performer and has been very supportive of me since I joined her Queerlesque course which I totally recommend.

Recently I was performing in Berlin and discovered Luna Tiktok, who is an awesome fellow QTIPOC performer based in the UK and an amazing International Burlesquer. I’m super excited to say that they will be dancing on the bar dancing with us at Femmi-Errect.

Also Zayn Phallic, who I met at the Man Up finale last year. Zayn is now running his own night called KOC, a night dedicated to kings of colour, and besides being extremely talented, Zayn is doing an awesome job in diversifying the drag king scene.

What’s on high rotation in your headphones at the moment?

I’ve been listening to Joanne by Lady Gaga, and I feel very surprised because I’ve never been a big fan of Gaga, but I think right now with the cold weather and getting over summer feels, its the best music to listen to for me. I think I got into the album after watching her Netflix documentary, which was surprisingly so good. I realised even someone as glamorous as Gaga sometimes lacks confidence and deals with self doubt, and her new album just makes me think of softness, self care and female empowerment, which even though I don’t identify as a woman, I am constantly inspired by.

Lots of trans people of colour feeling free to be themselves, all body types and skin colours feeling safe to exist in public. Nobody needing scene credit or insta followers to get attention or respect, everyone being equally valid humans.

Any exciting plans for 2018 that you can let us in on?

I’m excited to see what comes out of Femmi-Errect, I have some ideas for themes and I’m excited to bring them to life. I want to do some hot kinky femme events as well as a night dedicated to Asian Femmes.

I’m doing some collaborations these next couple of months - on the 22nd of Jan I’m performing as Eton Mess with Rebecca Morris at Camden People’s Theatre. On the 10th of Feb I’m performing with Tallulah Haddon in our performance duo Mystical Femmes at Deep Trash.

I’m also starting a punk band called Big Daddy and the Gimps, which is basically me screaming into a mic about all the things that make me angry. So it’s gonna be a lot of fun!

Catch Katy Jalili at Femmi-Errect on Friday 9 February from 9pm-3am at Dalston Superstore!