Those H.O.U.S.E. obsessed Legendary Children are back for another Superstore takeover! Neil Edward, Prince Pac and Elles McFierce'em return with their take on Balearic, acid and bumpin' house. After their recent inclusion on the updated version of the revered London House Tree for Faith fanzine, we thought we'd quiz them on their own thoughts on the London House Scene, where they started out and what their top picks are.... And they've also made us a very special mix especially for us! 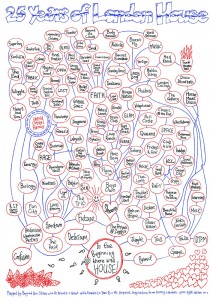 What was the first house night you ever attended in London?

Elles: I think it was on my 16th birthday at Ministry of Sound of all places. Roger Sanchez was playing... I have no idea how I got in as looked about 10 and had the most suspect fake ID. I guess the will was strong. I’d been to a few house nights at home in Cambridge, but being a bit clueless and overwhelmed we just went to the one we’d heard of when me made the pilgrimage to London.

Pac: I didn’t really come to London until 2007, being stuck down in the arse end of the West Country, but the first proper house night was probably Disco Bloodbath in their pink basement - despite playing loads of disco it was still very HOUSE.

Neil: Growing up in Hertford we would sneak down to Liverpool Street on the train for illicit late nights out in the smoke... The End was a favourite haunt of ours. As for House specific nights, Josh Wink’s Ultimate Base in 1998ish was probably the first.

E: Legendary Children of course! Hahaha after that Thunder is rad, also secretsundaze- they’ve still got it even after all these years. Bodyhammer is wicked too, and shout to newcomers Silk Cuts who are ones to watch.

Pac: Bodyhammer probably, or, if it can be considered house, World Unknown. I guess as it’s on the house tree it must be house, although I’m sure Andy will pick that one up with me at some point haha.

Neil: Yeah if we’re talking purely House Music it would be a toss up between Bodyhammer and Thunder. Joe, Paul and Matilda from Bodyhammer do a fantastic job and their party ethos is in the same vein as Legendary Children’s. Their music policy sums up everything I love about house, their choice of venue is always spot on and they have a knack of picking low-key guests that absolutely nail it. The Thunder family are up there because where the fuck else are you likely to see someone like Patrice Scott in a 150 capacity venue in Stoke Newington?

Nights in the capital come and go, so what now defunct night do you wish you'd had the opportunity to go to?

E: Shoom! An obvious choice but there you go.

Pac: Sabresonic or Blood Sugar I reckons, again an obvious choice, but I think this was Weatherall at his most creative and discerning point of his career.

Who is your favourite London born and bred producer/DJ?

Elles: Terry Farley. A lovely chap who has been very supportive of us. And of course Miles Simpson who is the original Legendary Uncle and head-man at Thunder. Also I loved Norman Jay when I was growing up- DJ-wise he was one of my first teachers (not personally, just through his work) of soul and disco.

Pac: I’m not sure who’s London bred and who’s just been here for years! I’d probably choose two of my mates as I know they’re definitely London born and bred - Andy Blake and Charlie Bennett. Charlie’s mix for us from last year was fucking outstanding.

Neil: That’s a tough call... There are so many good people out at the moment. Andy Blake would have to be in there for both for his production and DJ sets, both of which never fail to stun me with their versatility. Rocky and Diesel X-Press2 have been outstanding for the last 20 years or so, likewise for Uncle Terry Farley.

And finally what track do you most associate with the London House scene from any era?

Elles: I don’t think I can pick a single track. There are too many. The house-oriented sound most evocative of London is UK garage though.  I know that’s a whole genre but it breathes this city. Does that count as answer?

Pac: I don’t think there’s one track as the London house is so broad. Different club nights have their own perspective on what house is and that’s what makes it brilliant. I guess if you had to push me for something it’d be one of Pierre’s Wildpitch mixes which I hear played most times I go out.

Neil: X-Press2 - Muzic X-Press. If Boy’s Own was the hub of the London house scene in the late 80s/early 90s, this record would have been in the centre. It perfected London house to the point where Junior Vasquez and subsequently the rest of New York welcomed them with open arms, and you can’t ask for a finer endorsement than that.