It's the wedding of the year here at Superstore... My Big Fat Dalston Wedding, put on by the lovely Little Gay Brother Presents aka Terry Vietheer and Clayton Wright! Having put on parties at both Secret Garden Party and Bestival, these two are more then adept at pulling off the best wedding disco you've ever been to! They've roped in fellow Bestival party-starters The Wedding Crashers for the top bar and The Broken Hearts Club (Marro and Chris Camplin) for the basement!  We took Terry and Clayton for the first dance and a moment to ask them our burning questions about what's in store for the party...

Why did you decide on a wedding theme for your party here at Dalston Superstore?

Clayton: I'm single. I'm looking for a husband. And I only have a certain amount of time before my eggs dry up.

Can we expect full wedding attire for everyone involved?

Terry: Yes, including myself. This will be the third time in 34 years I have worn a dress.

Why did you both decide to set up Little Gay Brother?

Clayton: We are approached by Bearded Kitten and The Secret Garden Party to create SGP's first gay bar. It was too much fun to only do as a one off so here we are.

You're playing a disco set upstairs at Superstore- what's the cheesiest wedding disco classic you think you'll be able to get away with?

Terry: I'm keeping clear of cheese... kind of. I want to see the brides and grooms getting down and filthy. These will definitely be getting a spin though...

What kind of music can we expect downstairs though?

Clayton: It's music you can fuck to.

Terry, you're originally from Sydney- what made you make the move to London?

What are your fave nights and venues in London to go out to?

Clayton: The Bussey Building in Peckham, Netil House in Hackney and The Eagle in Vauxhall. In terms of parties... Gutterslut at East Bloc, Dirtbox at Vogue Fabric and Room Service at Miabella.

Why do you think Little Gay Brother and your guests The Wedding Crashers both work well in a festival environment?

Clayton: I have been working with The Wedding Crashers for seven years at festivals across the UK. The guys from Wales know how to throw an amazing party! We still joke over marrying Jake Shears to himself in a mirror at Glastonbury. 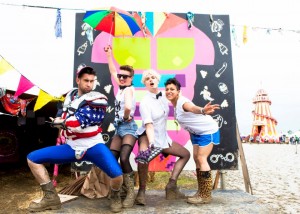 Who is your host Dave The Unicorn?

Terry: The biggest dickhead I have ever met and fast becoming the love of my life.

And finally, what other tricks do you have up your sleeve for the party?

Terry: I'm currently in the workshop with a tone of glitter and 100 cocks. Good times.

Join Terry and Clayton from Little Gay Brother on Saturday 17th November here at Dalston Superstore for My Big Fat Dalston Wedding from 9pm - 3am.
Share this page