This Thursday sees Littlebocker, the rebellious little sis' of Queer Dance Party Knickerbocker, return to our homo-pleasure palace! Since 2015, Promoters Alex Lawless and Aaron Zimbra have been slaying the night with Knickerbocker at their residence in The Yard in Hackney Wick! With queer inclusivity at its core, an irresistible mix of alt-pop, indie-dance & house and a plethora of East London talent having performed on their stage, its no wonder that Knickerbocker has reached iconic cult status.

For the seventh instalment of our collaborative lovechild, Littlebocker, we thought it was about time we had a ki-ki with Alex and Aaron! We caught up with them to reminisce about the beginnings of this dynamic-duo, their thoughts on masc4masc culture and why they think that the queer scene should be under the sea!

Oh hey Knickerbocker! Could you each tell us a bit about yourselves for those who don’t know you?

Hiyaaaaa. We’re two friends who have somehow ended up DJing and promoting parties together. We’ve both got irregular day jobs that influence what we do –Alex is a producer at BBC Radio 1 (you may have heard him 9pm weeknights alongside Charlie Sloth aka ‘Dusty’) and I’m a curator of performance art for Fierce Festival in Birmingham.

Knickerbocker is our bastard baby love child/Queer Dance Party that we started THREE YEARS AGO (don’t) at The Yard in Hackney Wick. Recently we’ve started a monthly sister night called Littlebocker on 4th Thursdays at Dalston Superstore which is real niiiice. 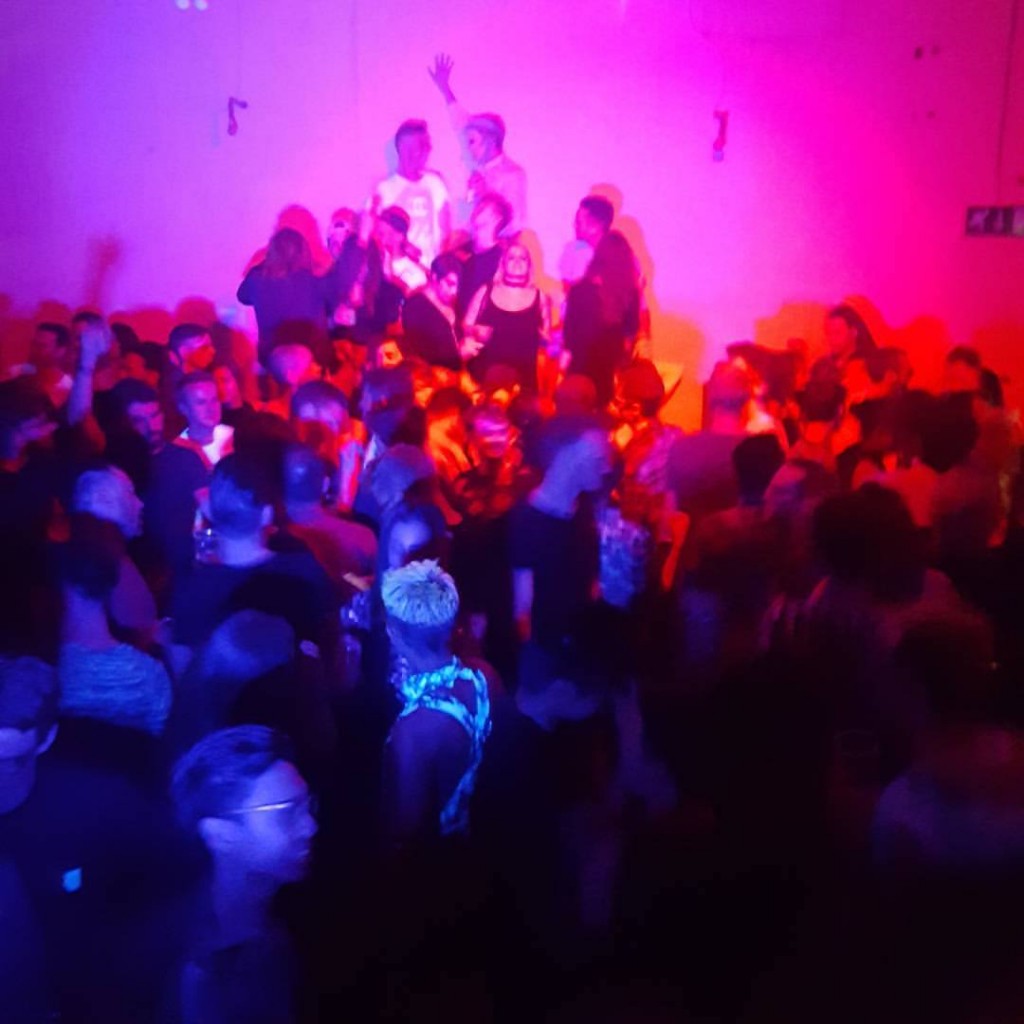 How did the two of you meet and start promoting together?

We met very much by chance in Edinburgh in 2010. After a one night stand and me deleting Alex off facebook for a year, its turned into an 8 year sentence, and counting. I’d wanted to start a club night for a little while, but was scared to take the jump, but then my friend Jay (at The Yard) started pushing me to do a night at his venue, and eventually I ran out of excuses, roped Alex in and bit the bullet.

What inspired you to start Knickerbocker?

We’d been clubbing in London pretty hard for a while, but our interest had started to wane: Looking back we were just going to the wrong clubs. We’d often found our women friends feeling uncomfortable in certain male dominated spaces – parties with ridiculous, hyper sexualized, or masc4masc names like PORK PARTY.

We wanted to create a more inclusive space, where our women and non-binary friends felt welcome. At the time we also found ourselves frequently dancing in pubs with bad sound systems – so we wanted to create a party that put the music first. At the time we weren’t exactly techno-heads, and felt that the world of electronic music was a little exclusive but we were also sick of hearing the same 20 party classics on repeat.

At Knickerbocker you hear the alt-pop you love earlier on, and as things get late, we ramp up the BPM and do a lil bit of crate digging as closing time looms.

For those that have never been to your party before – tell them what it’s about (and what they’re missing out on!)

It’s a friendly house party, where anything goes really. It’s a knees up for the mid week partier, a monthly salon for the queer, the interesting and the messes.

If you could change anything about the queer scene in London, what would it be?

Maybe it would be fun if we were all mermaids and it was all underwater and straight people were jelly fish.

If you had to sum up Littlebocker’s sound in one track, what would it be?

Hmmm, it’s not necessarily a KBR classic, but in terms of getting to the essence of what we’re about I think the Joakim remix of Robyn’s ‘With Every Heartbeat’ is probably a pretty good shout. It’s familiar, but strange and you can get lost in it. It’s a great track for late on when everyone’s slightly worse for wear. It calms people down for a bit before we crank up the dial again.

What has been your favourite release of the year so far?

Do you have an all time favourite music video?

I wouldn’t go back that far to be honest. I don’t fancy dancing to a fiddle and flute in a tavern humming of sewage. Maybe Weimar Berlin, but I guess Liza Minnelli wasn’t actually there and it didn’t turn out so well in the end. Probably David Mancuso’s Loft – it certainly inspired Knickerbocker a bit. Though actually I was reading about Grace and the illegal raves she threw in the 90s with the DIY Collective recently that got them branded the ‘most dangerous people in Britain’ – that sounded like a good time. 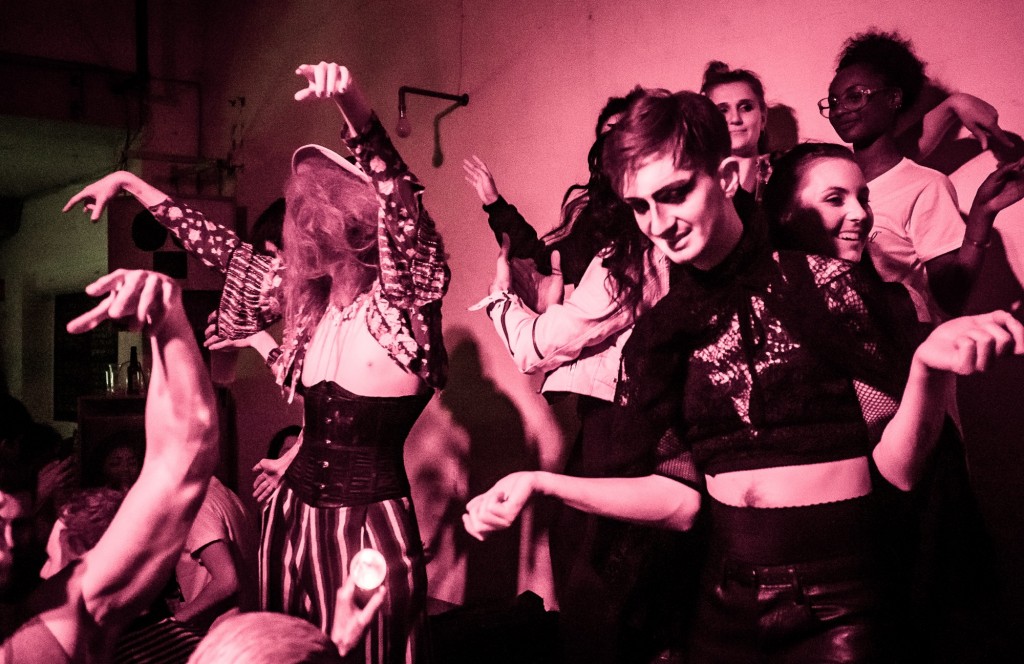 Who are some of your favourite performers in the East London queer scene at the moment?

Excuse the inevitable omissions, friends, but we love Eleanor Fogg, Victoria Sin, Edythe Wooley (Manly Stanley), Ellis D, Jamila-Johnson Small, Lucy McCormick, Thom Shaw aka Pam Lustgarten, marikiscrycrycry and of course HRH Oozing Gloop and our own ARTIST IN RESIDENCE Katy Baird. There’s a real rigor, inventiveness and political edge to all of their performances – and they’ve all performed at Knickerbocker at some point. Oh and I literally can’t stop laughing whenever John Sizzle walks onto any stage.

In three words or less, what should we expect at the next instalment of Littlebocker?

Catch the Littlebocker DJs at Littlebocker every fourth Thursday of the month from 9pm-2:30am at Dalston Superstore