With Louche magazine’s second Issue being released in July, drag king Georgeous Michael gives us a sneak peak of what's in store, and tells us why a print magazine about radical drag is important as ever! 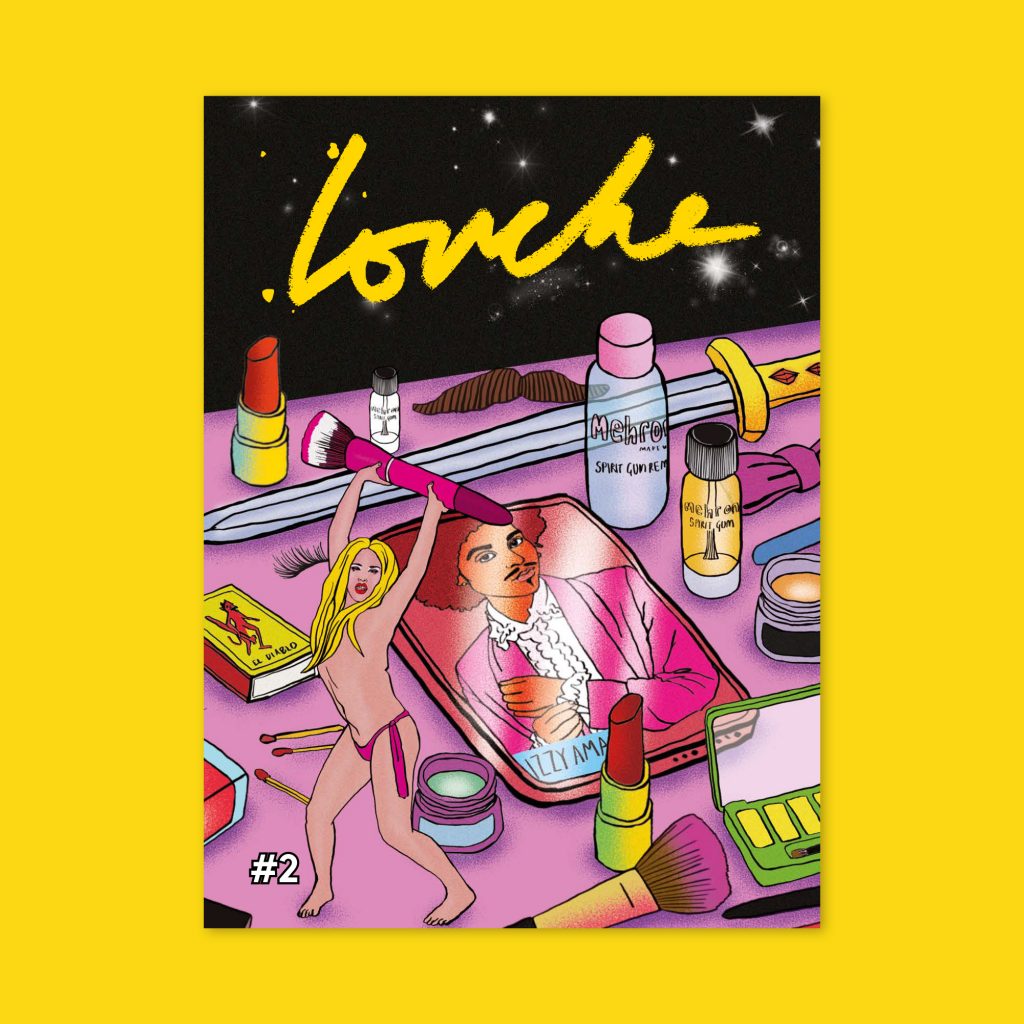 When the idea to create an independent print mag about drag first emerged, it grew out of there being a distinct lack of places and platforms to have a proper natter about drag. As a performer and a fan, I wanted somewhere where it would be possible to go deep and ask the Big Questions (like why all the misogyny???). So Louche was born! Now, you might say the landscape has changed. Gay Times has a dedicated tab for ‘Drag Race’ on its online platform, and we’ve watched queens lipsync for their lives on the BBC edition. But this mainstreaming of drag and increased exposure has not translated into equal recognition for all performers. From the simultaneous appropriation of drag king aesthetics and erasure of actual drag kings in Little Mix’s Confetti video, to RuPaul’s inability to call us by our name on national television (seriously, ‘macho drag’?!?), it feels like the confines of visibility within drag are growing paradoxically narrower.

It was a conscious decision when starting Louche, that the magazine would be a space to celebrate drag from across the Great Divide of kings vs queens (and everything in between!), without hierarchy. This is apparently as radical today as it was when the magazine first launched in October 2019. Because many of the inequalities which the mag aimed to address still remain, especially the sidelining of kings. Some have even gotten worse, exacerbated by the increasingly corporate atmosphere of drag today, which prioritises the monetized gaze. So, Louche’s anarchic spirit lives to fight another day, with Issue #2 released in July 2021. Here’s a little run-down of what you’ll find within its pages… 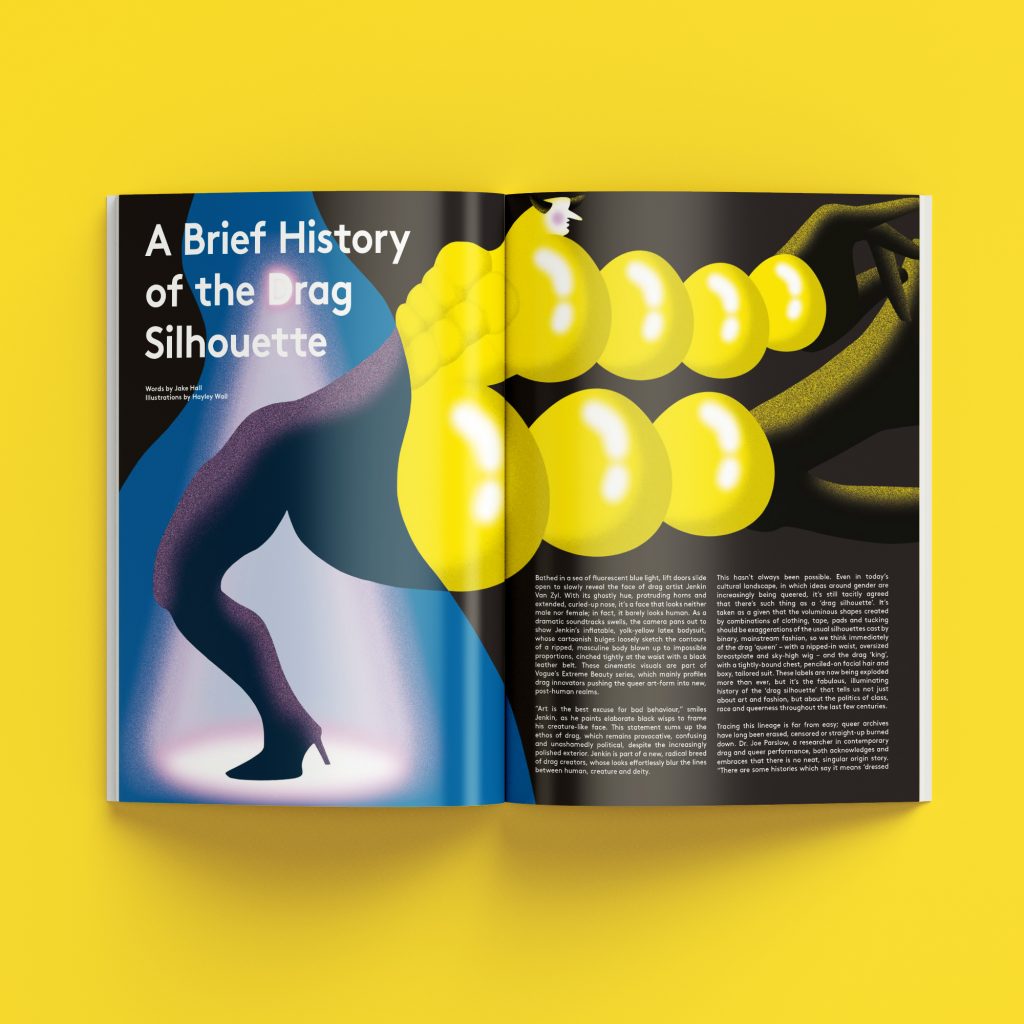 Spread from Jake Hall’s essay ‘A Brief History of the Drag Silhouette’ with illustrations by Hayley Wall.

For us, the joy of drag is that it has the power to swallow gender whole and spit it out transformed, something captured in Jake Hall’s article for Issue #2, looking at the evolution of the drag silhouette. In response to the corporatisation of drag, we looked through the ages and found artists creating masterpieces on a shoestring (sometimes with a shoestring), and Emma Kroeger makes a powerful case for DIY drag in the article ‘Democratising Glamour’, speaking to scene stalwarts Rhys’s Pieces, Cassandra, and Oedipussi Rex. East London’s own Barbs even shared some top tips for how to diamanté the shit out of that old (h&m?) dress.

Louche Issue #2 arrives in the context of a pandemic-shooketh world, in which performers, audiences, and venues have had to be physically isolated from one another for oh too many months. Our reemergence is patchy and still precarious. The theme of Issue #2 – ‘The Stuff of Drag’ – was chosen long before the pandemic wrenched so many of us from the everyday textures of queer life, but it feels spookily apt. Without access to live performance spaces and venues, a longing for the intimacy of touch emerges throughout the latest Issue, particularly Umber Ghauri’s piece ‘Conditional Love’, which captures the act of love that is decorating ourselves and each other. On the other end of the spectrum, Queer Ecologies interviewed Sin Wai Kin about drag as a spectral departure from the body itself, stepping into the realms of science fiction. 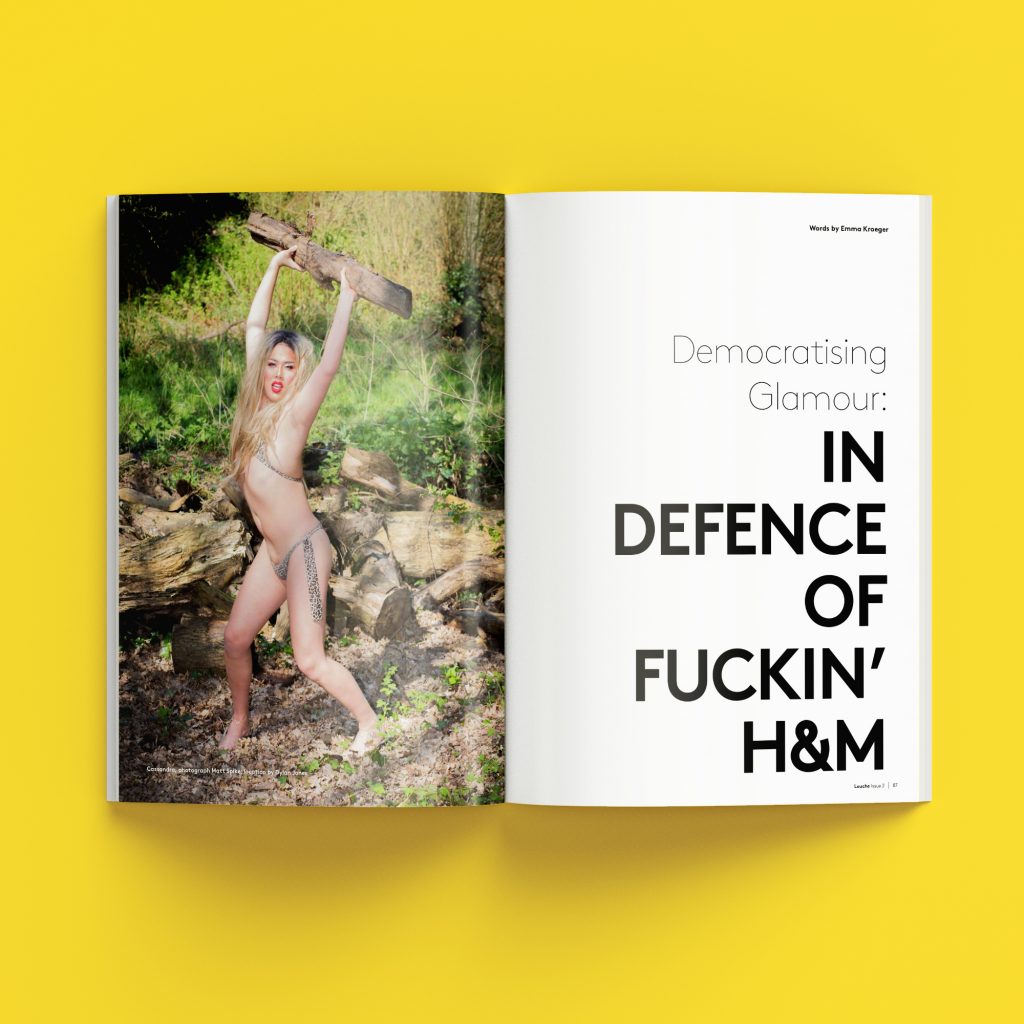 Perhaps more surprisingly, we found ourselves craving drag smells and the comforting familiarity of a sweaty basement (we love you DSS :P). This got us thinking about the ways in which smell itself becomes a symbol, and what this can tell us about gender ideology. In the photo essay ‘Man Smells’ with drag king Sigi Moonlight, we drag the world of perfume pour homme. The corporeal messiness of drag likewise comes through in ‘Glamour & Grime’, a photo essay delving inside the gritty archives of photographer Roxy Lee; and we take a look inside some Louche boys’ undies in the photo essay ‘Put a Sock In It!’ exploring the world of drag king packing.

With a year in the making, Louche has itself evolved, and we’re especially grateful to have had the support of an organisation reclaiming space for queer crips (quips) – Quiplash – in making Louche a more radically accessible project (a work in progress). As such, we’re chuffed to bits that Issue #2 will also be available as an audio file as part of our access provision for blind and partially-sighted audiences (and anyone who prefers all things oral ?), in addition to a print edition.

The aim of the magazine has always been to exist as a kind of archive. We want people to pick up a copy in ten or twenty years time and see a slice of history – their own, or those of people like them. It’s a project for queers by queers, and not repackaged and repurposed for straight people by Condé Nast. We celebrate the audacious and the radical in alt drag culture, and this, we hope, is its enduring power.