Swedish illustrator and London resident Martin Wollerstam joins us in the top bar this week for White Leather Viper Club. He's no stranger to Superstore however, with his work being featured both in group shows and his own solo show on our walls. His seemingly naive yet often dark and adult style of work really seems to resonate with people, so much so that his work has been used for Guy Gerber's record label Supplement Facts, featured in both TimeOut and the New York Times and regularly used for flyers for Fabric's Sunday night party WetYourSelf.

We posed some of our most burning questions about his art ahead of his set tomorrow and he even sent us a mix to give a taste of what lies ahead...

You've had a few exhibitions here at Superstore- which has been your favourite and why?

I'd definitely say my solo show, Relationship Out Loud, that I had last summer. It was a cynical study of love related relationships. I guess people could relate to it as it seemed to be appreciated by quite a lot of people and I was very pleased with my drawings, especially the large A0 sized illustrations that I made specially for it. 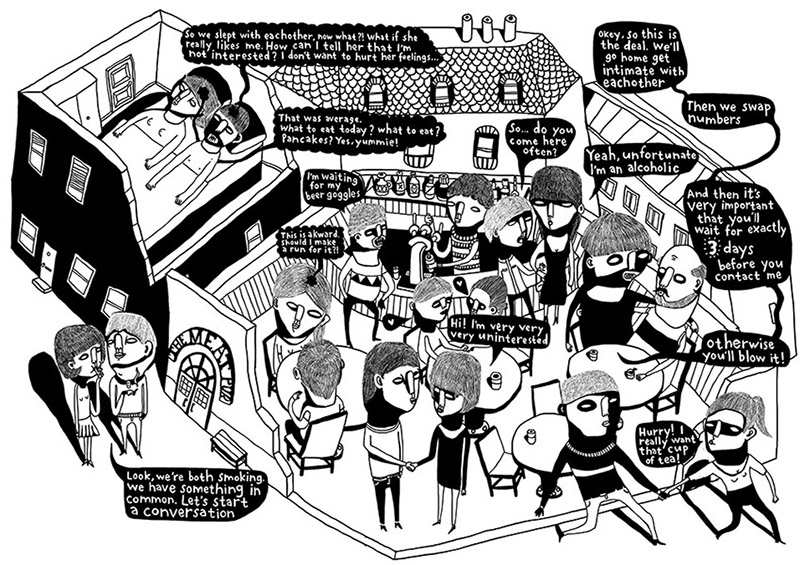 You also create the flyers for WetYourSelf, the weekly Sunday night at Fabric... how did that come about?

A good friend of mine that used to live in London introduced me to one of the founders, Peter Pixzel, and after only three days living in London I went to my first, (and their second ever), WYS party that used to be at Aquarium. That first year I think I probably went to all their parties. I became friends with the WYS crew and they asked me to design their logo. Two years later when they moved to Fabric they felt it was a good idea for me to make the artwork for their flyers and yeah, here I am.

Can you tell us about the creatures that appear in all the WYS drawings and the narrative running through this year’s batch of flyers?

I wanted WYS to be something big that creates havoc over London. At first the humans ran in fear, then fought back, then both sides had to realise that they needed to work together and they became good friends.

The second year it was more about WYS giants having fun and more of a focus on individuals.

And this year my idea was to follow a WYS giant growing up and each month's flyer shows it meeting a new friend that added up to some kind of entourage. 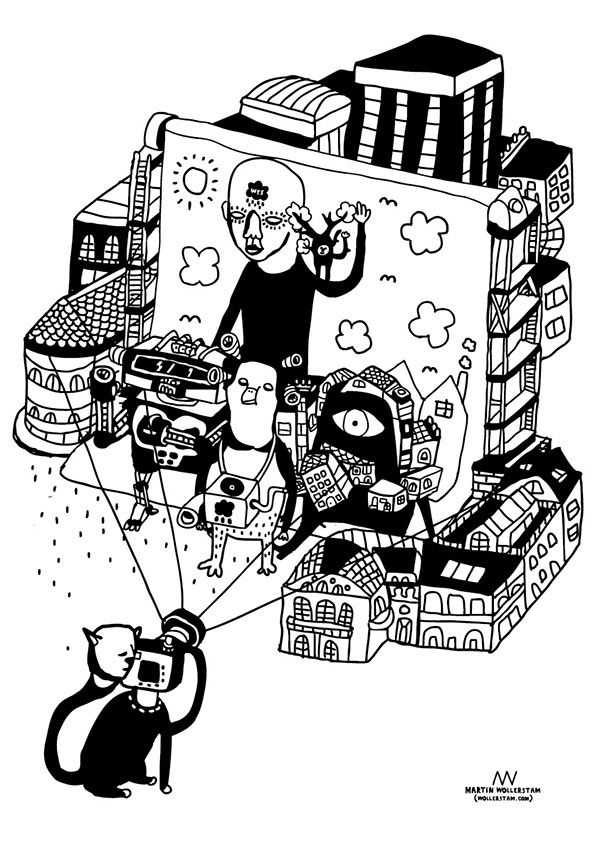 Your work can be quite dark- what inspires you?

It's always been there. There's something about the dark, the wicked, cynical humour and madness that appeal to me. I don't find horror as entertaining though.

And don't get me wrong, I'm actually a nice guy, hehe.

Earlier this year you had your work featured in the window of Selfridges. That must have been pretty exciting....

Yeah it was really fun. It was a collaboration with fashion designer William Richard Green for Selfridges' Bright Young Things. I had made a tiled illustrated print for his collection and we made an installation taken from that print. 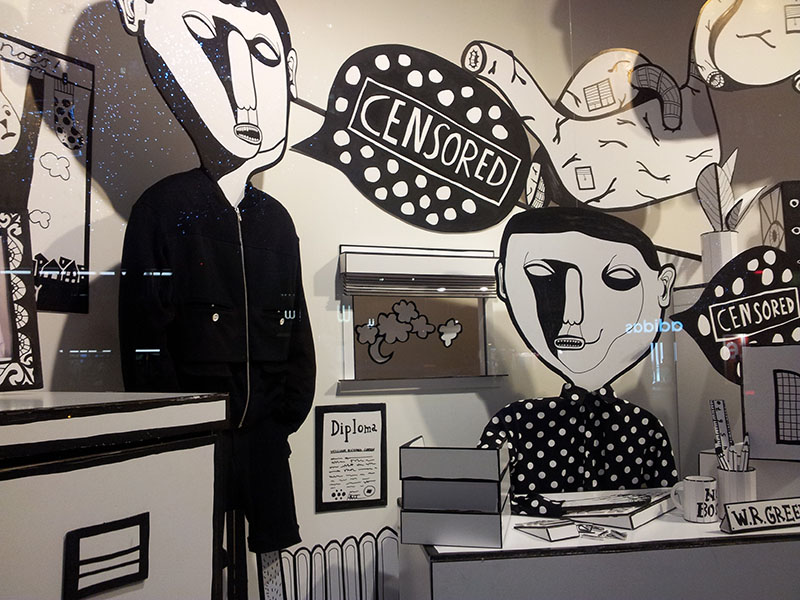 What's the most unusual place your work has ever been featured?

Haha, I think it must be when I made live drawings projected on some stranger's wedding in a barn in Essex. It was quite weird, because I wasn't really sure what I was suppose to do and it was meant to be in the background while they had the reception dinner, but when I was about to start it turned into a performance instead. It was a bit of a high heartbeat and sweaty forehead of a moment, but they seemed to like it.

I'm working day and night on a mural sketch for a competition that I've been chosen for together with five other artists. We're competing to get one of two areas to decorate for a new culture centre in my hometown back in Sweden. It's a high budget project and hopefully I have the opportunity to make a large mural. Fingers crossed.

What other large-scale murals have you done in the past?

Biggest I think must’ve been for an office in Stockholm, which they flew me over to play with last year.

What kind of music do you plan to play at White Leather Viper Club?

Post-punk, new wave, synth-pop and other nice synthy things from (or inspired by) the eighties. Yes, there's where my heartbeats are.

And finally, what is your dancefloor killer track?

Hmm… hard one. Right at this moment I feel for dancing to Enola Gay with OMD.

For more information on his work visit: www.wollerstam.com