Founder of the wonderfully named Dick Slap night and Editor in Chief of Nark Magazine from far-flung Seattle, DJ Nark joins us for his Superstore debut this bank holiday Sunday for a bite of Battered Sausage! In between the magazine and running nights across Seattle, including Bottom Forty, DJ Nark has found time to pop over to Europe, see the sights and play all the coolest queer parties the continent has to offer. So ahead of Sunday night's sausage fun we caught up with him to find out more about the delights of Dickslap, the delights of the Pacific Northwest and the delights of Nark himself...

You’re Editor In Chief of Nark Magazine (as well as Nark being your name!)… How did Nark come about?

When I moved to Seattle it was even more off the map then it still is now, and it was really cool to me to see people expressing themselves in such crazy ways on the street or at punk shows or parties or whatever, even though they weren’t living in a city where they would get “seen” or “discovered.” I wanted to give them the attention they deserved, and I wanted to document it out of appreciation and so the world could see it, whether it be immediately or generations from now. Also I was fed up with trying to be a graphic designer and decided I was just gonna do whatever the fuck I wanted and see how it went. Originally Nark Mag was going to be a street fashion blog, but then I started photographing the night life scene, and everything evolved from there.

Well, let's say it's summer, because if it's winter we're mostly inside watching a fireplace screen saver on tv. We'll pack a bag full of champagne and egg sandwiches from Homegrown and head down to lake Washington to lay on the docks with speedo-clad homo's going for dips in the lake until we're fully sunburned, followed by a gourmet version of American diner food at Skillet on Capitol Hill, and then go for Moscow Mule's at my favorite bar Montana with locally made Rachel's Ginger Beer. As for dancing? The options are endless, if it's Sunday we're definitely hitting Flammable at ReBar, a house music weekly that's been going for 15+ years, we call it church and it's amazing. Any other night there's The Eagle for high quality slutting, you can see some major players on Thursday nights at Q, after hours at The Monkey Loft or a warehouse party, or dance like crazy in a maze of repurposed train cars turned Chinese restaurant/karaoke club/occasional dance party known as Train Car House Party.

What track do you play to get the boys to take their tops off?

Lately I’ve been obsessing over Furfriend, it’s a bit campy and doesn’t work for just any party, but when the lyrics come in from this song it’s just TOO GOOD.

You’re originally from San Diego correct? How did a nice boy like you end up running all things queer up in Seattle?

I actually grew up in a weird cow town turned super suburbia south of Sacramento but moved to San Diego when I was 18. San Diego is so creatively stifling, stagnant and conservative that after four years I fled to Seattle, ready for anything, anything but San Diego! All that pent up energy plus an instant love for Seattle's whacky characters and eccentric vibes culminated into pushing for more and more weirdness. I didn't intend to "run things" but I guess I'm a bit of a control freak, and there was this wide open space just begging for it. Now Seattle's nightlife is saturated with queers and crazies and I consider it to be one of the most high quality scenes in terms of diversity, programming and fantastic clubs and venues.

Dickslap is an amazing name for a night- is there a fun origin story for that?

It's sort of the story to end all party stories as Dickslap started as a political movement against the homophobic oppression laid down by the state liquor board, we decided to break all the rules including the conventionality of party names, you can read all about it here in Vice Magazine.

Your posters are always on point. Especially the recent memorable one featuring everyone’s favourite Facebook sticker Pusheen. Who comes up with the ideas, how do they come into being?

My background is in design and so I create 99% of our posters and everything, while outsourcing occasionally to the fantastic Ian O’Phelan in LA when I'm too slammed. Dickslap posters always start with hours of browsing gay porn on Google contemplating, "hmmm, perhaps if I turn that ass into a cake... Or maybe this one he's seeking buried treasure in his hole..." and so forth and every single time I can't imagine coming up with another idea even stupider than the last, but something always comes about, even now when I have to make around 30 per year. The important part is to not take yourself so seriously, and perv up ANYTHING you can, celebrities, video games, even Pusheen (who I also made a leather daddy version of a while back...), the serious part is about the music, but I get bored of serious music parties with overly serious and even depressing art direction, even the deepest techno can be fun. 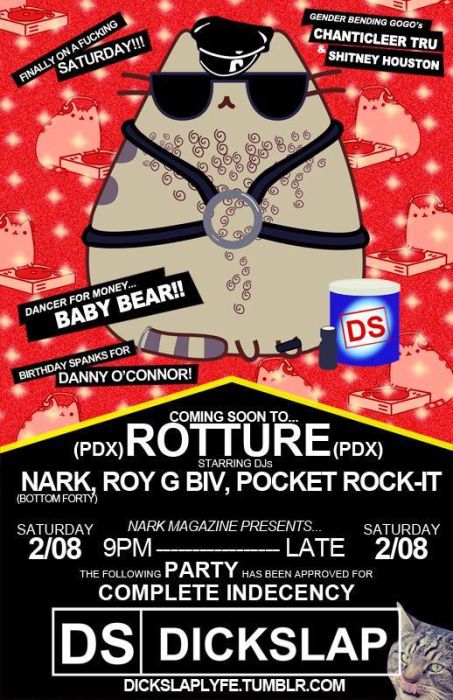 You’re joining us here at Superstore for Battered Sausage on bank holiday Sunday with Discodromo. Exciting! If you were putting together a Memorial Day party in Seattle who would you program on the lineup from local hero Djs to big name foreign bookings to drag queens and dancers?

In Seattle, the biggest group of clubbers on a three day weekend is gay dudes and hot daddies, so if I could I'd have Horse Meat Disco of course, teamed up with my crew of dance floor destroyers Bottom Forty, and I'd have BenDelaCreme and Jinkx Monsoon picking out which daddies get to skip the line via a pit-sniffing test (they love that shit, so don't wear deodorant). Actually I may have already done this exact party.

The Pacific Northwest is the utopia for outcasts and weirdos who also double as fierce party machines, and the nightlife scene is so diverse between what is definable and non-definable variations of gender and sexuality, but also what makes it tick is the strong bridges between the quote on quote gay and straight crowds, which is usually difficult in most cities, but Seattle seems to live and breathe as one entity (at least in the happy underground love vibing scene, we do still have that bridge and tunnel bottle service aggro bro scene, but who doesn’t).

You’re currently on a pretty snazzy euro-tour… what’s the best or most interesting queer space you’ve visited or played at so far on your trip?

So far the Coxy party in Warsaw, I'm told it's basically the only gay party in Warsaw so the fags come out in troves. Also the venue, Nowa Jerozalima, used to be a children's hospital so it's several floors of dirty, dingy ass creepiness and I loved it.

Sum up for us why the US needs marriage equality…

Because gay dudes deserve to lose half their shit in a divorce too. Plus it'll eventually spark a remake of Dynasty and The Golden Girls with an all gay cast, and if that isn't social justice I don't know what is.

Join Nark for Battered Sausage this bank holiday Sunday 24th May from 9pm - 4.30am.