This week we welcome a special guest writer to the Superstore family in the shape of Niall Connolly aka producer CVNT TR4XXX! A scribe over at Dangerous Minds, and the author behind an indepth piece on ballroom for respected tech and culture site Boing Boing; we're super excited to see what he's going to pen for us. Before that we posed a few of our own questions to him to find out more about his music and his interests...

If you were on Mastermind, what would your specialist subject be?

Wow, that is a good question. I have a lot of areas of interest and a few obsessions, though I don't know if I know EVERYTHING about them… voguing (from old way to new way to femme and dramatics), Paris Is Burning, the films of Dario Argento, Chicago house from 1983-1987, French house from 1996-1999, the work of Alan Moore, Heathers… I mean, I love them all but I don't know if I could answer ALL the questions! Probably the only thing I know better than anyone else is myself, so could I just do a round about my own life?

CVNT, or Cunt Traxx as it started out, is just me. I've been making music since the late '90s, and I have collaborated with a bunch of different people, in bands, with previous singles as the Niallist on Dissident Distribution, and also on my last full length release, the mixtape AKA from 2011. That features tonnes of collabs, from Yo Majesty, Cherie Lily, Ali Renault, Ben Butler & Mousepad and loads more people. 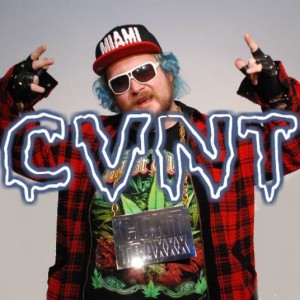 CVNT is different though. It started off as a very functional thing, making tracks just for the dance floor, influenced by the new school of ballroom/vogue producers from the States like MikeQ and Vjuan Allure, as well as footage of the amazing dancers. Unexpectedly some of these tracks have blown up and gone viral, so it has kinda taken on a life of its own now. I've loved house music all my life though, since hearing MARRS as a child, so this project can't help but be a personal thing as well, reflecting my love of house from now and back then, as well as reflecting the great influence I take from the actual voguers, watching their bodies move and thinking about that when I make music. I was kinda in a rut before this, as I think the whole house genre was, but getting into ballroom about three years ago really re-ignited my passion for house music. So CVNT is a weird mix of the personal and the functional, which in a strange way is a more liberating experience than working as The Niallist, where I think people had certain expectations of what I did.

Which of your musical heroes would you most like like to see a biopic of? Who would play them and which era/aspects of their life would it feature? Sell it to us!

That's a good question. I studied film at university so I have thought about this. When I was younger I used to daydream about a Beach Boys biopic (not sure about Brian, but Philip Seymour Hoffman would play Carl, Owen Wilson would play Dennis and Dan Akroyd would be their dad) but that seems way too big in scope to do.

I would have to say that right now I would love to do a biopic on Willi Ninja. I'm not sure who would play a young Willi, but I've always loved Wesley Snipes, so he could play older Willi maybe. Or maybe he could be Paris Dupree, who would be Willi's vogue mentor. I think Willi would have to be an unknown actor, preferably a very athletic dancer who could pull of his legendary moves. I'd like to have Bette Midler in there too for shits and giggles, I'd love to get Michelle Rodriguez to play a trans woman, and there's just so many talented drag artists who could be involved. RuPaul would play Pepper LaBeija, Benedict Cumberbatch would go ginger to play Malcolm McLaren, and my current girl crush Brooke Candy would play Madonna. The setting would obviously be the Harlem ball scene of the early 80s, and expanding to international settings later as Willi gets famous for his dancing (Paris, London, Berlin, Tokyo) and dancing at clubs like Sound Factory and events like Wigstock. The film would be told in flashback by Willi on his death bed, and it would have to be quite poetic with long arty scenes of voguing and references to all the music videos he starred in. I do seriously think about making a voguing feature film all the time, and putting as much love and care into capturing the dancing and clothes as Bob Fosse would.

If I couldn't do Willi Ninja though, I'd do Larry Levan and the story of the Paradise Garage.

You've been posting a lot of previously unpublished interviews on your Tumblr that you conducted as research for your article on ballroom for Boing Boing... what was the most personally enlightening interview?

There were two that stand out. The first was from Shaun J Wright about his experience getting involved in the ballroom world about ten years ago in Chicago. His answers are just very detailed and honest, they are lovely to read. The second was my second interview with Vjuan Allure. He gave me a detailed breakdown of some terms used in ballroom that I didn't understand, and it set me straight on a few things. I will be publishing that on Cvnty soon. I should also give a shout out to Alex/Bok Bok too, cos he was the first person I approached, and his answers made me realise the piece would have to be in-depth and serious, not throwaway or "laugh at the freaks" like most ballroom coverage has been. Having all this background material, as well as being a voguing nerd who is always approaching the legends of the scene, is what inspired me to start the Cvnty blog.

If you could found your own fantasy House, what would it be the House Of, and who would be in the House family?

Well hunty, I already HAVE my dream House, the House of Tranarchy, right here in Manchester! Tranarchy was founded by me and my partner The Midnight Growler in 2011. We met through a shared love of vogue and horror films, and we were the first people to host a vogue ball in Manchester, in January 2011, called Vogue Brawl. I had hosted the inaugural Fierce Ruling Divas Ball for Menergy in Glasgow the year before, and we wanted to build a similar platform to show off all the crazy energy and creativity on Manchester's queer scene. Since then we have thrown some legendary outlaw parties in public places, held interactive drag film screenings of cult classics like Showgirls, made a ton of videos and photo shoots, had Derelicte rubbish couture competitions, and performed live as Tranarchy Sound System. The third Vogue Brawl will be coming up this summer, as well as a series of events we're putting on with Islington Mill and Off With Their Heads called Bummer Camp, that will feature two of our idols, the insane and incredible drag terrorist CHRISTEENE, and Cody Critchloe aka SSION, who makes incredible electro-pop and is basically the perfect pop star.

There are core members of Tranarchy, like me and Growler and Pam Van Damned but we also have a lot of affiliates from other Houses in the North like House of Suarez in Liverpool, House of Menergy in Glasgow and the Sisters Gorgeous in Manchester. We consider everyone to be a part of the Tranarchy family, we started the House and put on Vogue Brawl to give all the people we know a chance to show off their styles and skills. It's a beautiful thing. At the end of the day we didn't come to be shady, just FIERCE.