This Saturday sees Susanne Oberbeck, founder of one-woman industrial band No Bra, grace the Superstore basement for a special DJ set at Club Lesley. Having been a staple on the East London club scene, Susanne has since made the move to New York where she continues to perform live and DJ, including for controversial gay pornographer Bruce LaBruce's live shows.

We caught up with her to chat art, the avant-garde, mustaches, books, tits and more ahead of Saturday's set!

Why did you decide to move from London to New York?

I was drawn by its energy.

What book(s) are you currently reading?

These are the books currently on my bed: collected poems of Langston Hughes, Hot And Cold by Richard Hell, Our Lady Of The Flowers by Jean Genet, The Job: Interviews With William Burroughs, Kafka Toward A Minor Literature by Deleuze and Guattari, The Women by Hilton Als, M by John Cage, Sister Outsider by Audrey Lorde and the I Ching. They are all worth reading!!

You're known for having a pretty eclectic taste in music. What can we expect from your DJ set here at Dalston Superstore?

Am I? I will be playing a lot of new music coming out of New York, I don't think it's overly eclectic, a lot of the music I play at my own club there, and it’ll be very danceable.

Why is there such a strong relationship between club culture and the avant-garde?

Because it's instant and up to the minute and doesn't cost much... you can experiment and you don't need someone more conservative to give you money to do it. People coming together in this way generates energy and new ideas.

However I find using the term "avant-garde" today a bit dubious because it could be read as just another marketing cliché intended to keep the "avant-garde" in a safe place where it won't lead to any genuine change.

What made you make the move from film-making to music?

I thought I would be better at it and I was desperate to perform! It’s more fun, you have more freedom to be inventive, it's considerably cheaper and you don't depend on other people to make it happen. But I do want to get back into making narrative films and more music videos in the future... I think it's easier when people know who you are and you don't have to struggle to be respected. [Especially] If your ideas are perceived as slightly unorthodox.

Where do you feel has had the biggest influence on you- your hometown in your native Germany, your adopted albeit temporary home of London or your current home of New York?

Probably London. Also I am not from a town but a village!

You've spoken previously about the need to balance getting your tits out with wearing a moustache. Is this something that still informs your performances and if not what does now?

Where is this quote from? It sounds like it was meant to be a joke. I guess using gimmicks like that has shock value and it looks extreme and serves as a short hand for something maybe more subtle I might have feared people would not get. Really it was just kind of a satire on double standards surrounding ideas about speaking and performance, subject and object, male and female, active and passive etc. Plus I felt comfortable in half-drag. Anyway now that I have grown as a musician, if I may say so, I'm more interested in just being myself on stage and let the songs speak for themselves, because it's actually more powerful, [to] create something new rather than make music that is partially rooted in satire, or holding a mirror at the audience like in the Leonard Cohen song.

How did you come to DJ for Bruce LaBruce?

We have been friends for a while. He asked me to do it. 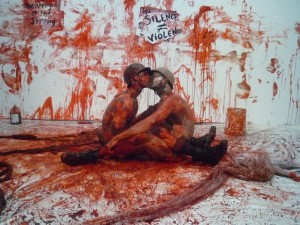 How do you go about picking music to soundtrack "gay zombie soldiers"?

Bruce named one song (For What It's Worth by Buffalo Springfield) that he thought would be good and so I think I got the idea of what he was after… [and] er maybe mixing in my own feelings about the topic at hand. We were at this strip club called Macho Mondays and there were better things to do than discuss a DJ set. I didn't really prepare it, it’s always best to improvise on the spot because then the audience becomes part of it.

And finally, what was the last piece of art you came across that genuinely moved you?

As in sending shivers down my spine? It was actually a fashion show but I’m not gonna tell you which one! Is that considered art?

No Bra plays Club Lesley this Saturday 22nd September from 9pm - 3am with The Lovely Jonjo, Michelle Manetti and MDMX and you can catch her performing live at the Twat Boutique warehouse party on Friday 5th October.