Next week sees the launch of a brand new Thursday night from the trailblazing and openly gay rapper QBoy. He's delving into his love of classic hip hop and r'n'b, covering all decades and sexes (but lingering longest in the '90s) for his latest club offering, the aptly named Put It In Your Mouth. We caught up with QBoy ahead of the party to quiz him on divas, rappers, records and being gay in hip hop...

What is the ethos behind your new night, Put It In Your Mouth?

Hip-hop and r'nb has always been my background, especially late '80s and all throughout the '90s, and right now there seems to be a big demand for it all over again which pleases me no end as a DJ. I've been having the time of my life playing with Neil Prince and David Oh at our night R&She where we play only female artists from hip-hop and r'n'b - but there is still always so many great tracks by male artists that I want to play or that get requested, so I wanted to make PIIYM a solid all-round '90s r'nb party - with a little '80s classic thrown in.
Which hip hop artist or rapper would you say has had the biggest influence on your career?
Salt-N-Pepa are my Queens no doubt. I've followed them since I was much younger and I am blessed to count them as friends of mine now (or you could say "stalker fan hunts down icons until they give in," haha). I think Salt-N-Pepa are still the best example of great hip-hop as they were interesting characters and personalities, they were fashion trend setters, they made great music that everybody loved even if you were not a fan of rap - many with lyrics dealing with serious matters but in a palatable and comfortable way, and they gave the best performances, with girl DJ Spinderella, full live band and dancers and choreography. Most rappers just walk up and down with a microphone, which to me is not that captivating in a live performance. I would have to add PIIYM poster girl Lil' Kim as a big influence too! 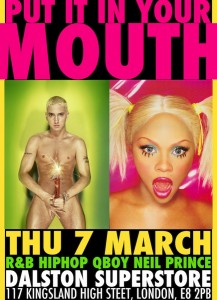 Neil Prince from R&She will be joining you for PIIYM... any other familiar faces we can expect to see over the next few months?
Yes yes - I definitely will be bringing in David Oh from R&She and DJ Mistamaker from new hip-hop night GULLY. Mistamaker started gayhiphop.com over 12 years ago and he is without a doubt the best scratch DJ instrumentalist the gay community has - a real talent.
What was the first ever hip hop or r'n'b record you ever bought?
Mmmmm - does early 5 Star count as r'n'b? I would say it was probably Neneh Cherry's Manchild on 7", but I also had a lot of Technotronic back then too - not strictly hip-hop but definitely rap!

Which year or decade of the music you love do you wish you could go back to?

Personally 1989 into 1990 was the most exciting music period for me. As well as Salt-N-Pepa and Neneh Cherry, I was also heavy into Janet's Rhythm Nation 1814, the tail end of Michael's Bad, De La Soul, Soul II Soul, Technotronic and the whole hip-house thing I loved too.
Since your debut EP came out in 2004, do you think it's got significantly easier to be accepted as gay in the hip hop community?
I was never trying to be accepted by the hip-hop community. I actually had to fight to be accepted by the gay community. The gay community had little understanding of rap music, of hip-hop culture and were incredibly intolerant at first. Now it seems there is a new gay rapper every other week so I guess it's easier now.
With homophobia still fairly rife in the genre, are there any artists you won't play out?
I don't agree with that. Homophobia is rife only in the gangsta element of hip-hop and it is the gangsta element that has been pushed - on purpose - by the major record companies since the early 1990's. The homophobia, sexism, violence, gun and drug promotion was not in any of the mainstream acts before 1993. So, if you think hip-hop is homophobic then you are not looking hard enough for artists who aren't. With the internet now you don't have to listen to just what is played on the radio or TV anymore.
Best ever diva beef for sheer entertainment value?
A gay rapper never spills dirt on those he worships haha! The real divas I have met have always been nothing but friendly kind people. The Lil' Kim verses Foxy Brown story however, as old as it is, was so entertaining way back when I seriously watched it like episodes of Dallas! #DRAMA!
What's the most treasured record you own?
Hmmm... probably my signed Salt-N-Pepa LP's!
And finally what can we expect to hear from your own music this year?
I am preparing to make the first music video from my new album. The song is a cover of 1979 classic Pop Muzik and I am super excited about it! I am talking with various directors about the right treatment as we speak - expect it in the Spring!
Join QBoy for Put It In Your Mouth on Thursday 7th March at Dalston Superstore from 9pm - 2:30am.
Share this page