On the week of International Women's Day, we are thrilled to announce that the latest inspiring artist to hit the lazer pit for cult girls night Fèmmme Fraîche is Berlin-based artist Sky Deep! Having dabbled in pursuits ranging from creating and curating queer festival Reclaim the Beats to starting and managing her own record label Reveller Records, she is one very inspiring woman with many tricks up her sleeve! She took a break between balancing roles as a DJ, producer, actor, director and festival curator to chat to us about queer vampire cinema, musical roots and ancient Egypt!

Hi Sky Deep! We can’t wait to have you at Femmme Fraiche! How has your 2017 been so far?

Well, so far things have been off to a running start! I'm feeling really creative and working on new productions, collaborating with some amazing singers AND I'm blown away at how my film has taken off and is being recognised by some key LGBTQ festivals.

Can you tell us a bit about your label Reveller Records and how it came to be?

I was sitting in my tiny Brooklyn apartment in 2012 thinking about how me and my friends could get discovered by some music mogul.  Then I decided it was time for us to discover ourselves!  So I created Reveller as a small support group for artists that I knew and loved. Even though it's a lot of work, it totally pays off when I can share the shine with people I believe in.

You are the creator of Berlin’s queer festival Reclaim the Beats. Can you tell us a bit about what inspired you to embark on that project?

When I see something missing in the music or entertainment world,  first I probably complain about it and then I DO something about it.  In this case,  I felt the musical genius of many POC and queer people continues to be erased by the patriarchy. The way the music industry media presents electronic or rock music would make it seem that we never had a substantial part in this type of music. Reclaim the Beats represents the foundations of most forms of popular music and is meant to remind people of the origins OR educate those that don’t know. I feel it is important to remind us of our role as inventors in the music world so we can continue to feel free in creating ALL genres of music in an empowered way. Reclaim the Beats is important to give these marginalised artists a seat at the table, and a chance for the rest of the world to learn about this point of view while experiencing music magic through the five days of the festival.

And as if that weren’t enough to make us fall in love with you, you are the director and lead actor in queer vampire erotica feature film Enactone! What inspired the film?

I looovvvve vampire films, playing dress up and steamy scenes with hot people!  I always wanted to play a vampire in a film and hoped someday someone would cast me. I wouldn't have cared if it was a tiny role, I just always dreamed of it. Until one day I took a walk through a beautiful cemetery in Berlin, I was inspired by a creepy thing I saw there.  A window in one of the mausoleums was broken and when I looked inside, I saw a freakish blue light and an open, empty coffin!!!! It was that moment in 2014 that I decided to write and make the film. 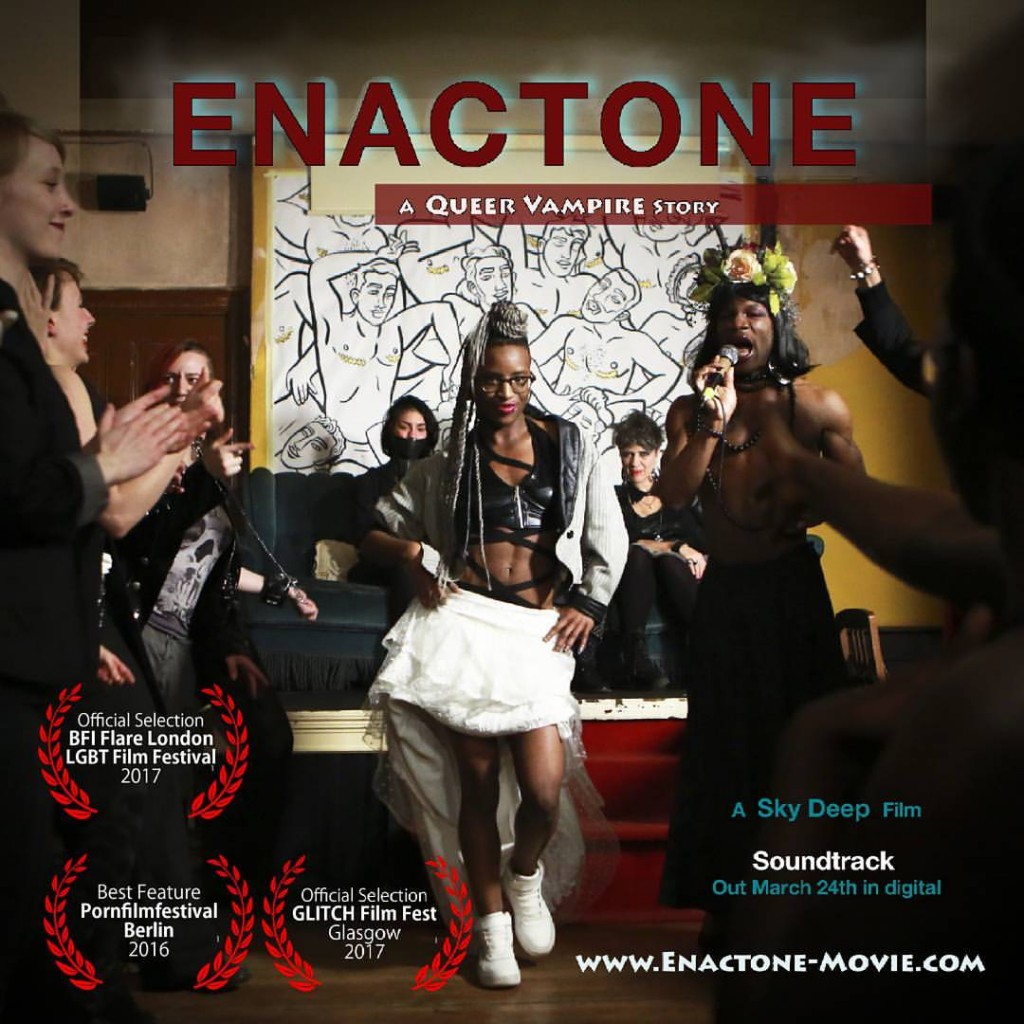 How have each of the cities you’ve called home influenced your sound?

I'd say Los Angeles and Long Beach was where I received most of my hip hop influences. I was a big fan of West Coast beats and rappers. Dr. Dre was my favorite producer. I loved the G-funk Cali-swing that came from there.

New York/New Jersey I was mostly influenced by my father's side of the family and the gospel, funk and disco roots. When I was a small child, I was surrounded by band rehearsals and singers and even tried to write my first love song when I was seven years old.

Both the previous cities were constantly infused with house/techno  dance parties. Berlin has shown me the incredible depth of possibility in electronics... Because of this lovely and crazy place, I keep stretching the limits and mashing together everything I've ever known.

You have achieved such an amazing range of things as a DJ, producer, director, festival curator (and more!) that this must be a difficult question to answer, but what has been your proudest moment?

Actually, my proudest moment was during my first theatrical performance when I was 16 years old in front of more than 500 students at my high school. There were some girls that used to make fun of me and they laughed when I first said I wanted to audition for the role of a beautiful black Queen representing the diaspora. I was sooo shy that nobody thought I could do it. But my mother coached me in preparation for the audition... They didn't want to even watch me... they laughed and chatted with each other when I was standing on stage. I was sooo angry. I stood there like a Queen until all of them shut up. Then I performed the piece. They were blown away and unanimously decided that I should definitely have the role.

That moment will always be huge for me.

I would want to go to Egypt around 2650 BC... I'm sure they had an incredible dance party after they finished building the pyramids AND I'm pretty sure there had to be some aliens present. I bet that was the BEST party in the world at that time!

Any exciting plans for the coming months that you could let us in on?

Yes! This month on 24 March my film premieres at BFI Flare London LGBT Film fest and on the same day, we release the music soundtrack from the film too. It features sexy music, and vogue beats from several artists. We also show at GLITCH in Glasgow on 25 March.

In April, we are releasing the Dark Pum Pum EP from Hllywd featuring remixes from Bearcat, Mike Starr.

In June, I'm re-visiting the USA for a DJ tour and also with my film this June.

And finally, in five words or less, what can the girls of Femmme Fraiche expect from your set?