Thomas Bullock of Rub N Tug, Map Of Africa and formerly of A.R.E Weapons fame, joins us once more in the dark and sweaty lazer basement for a night of musical mayhem. The top bar fares just as well with Grizzle (aka John Sizzle and A Man To Pet) holding a special "When Transvestites Attack" Extravaganza PLUS they're joined by special performances from My Bad Sister and MC Gaff E.

Originally from the fair city of Cambridge, Thomas Bullock moved to America in the early '90s and has only recently moved back to the mother country. Rather unusually, he's started up a new company, Spirit Bear Mezcals, alongside his music career. We spoke to him about all this and more...

How did you get into the mezcal business? Is it something you've always been interested in?

The first time I drank it 10 years ago down in Mexico I became pretty deeply connected with it. In hindsight, I kinda knew then it would always be a big part of my life. I got more and more into it, visiting these first floor distilleries in the jungle until I met all these cats in DF who had the best shit that no one outside of Mexico had ever tried so I thought alright, I'll take some of that back to England with me, a nice going home prize after my 20 year road trip…

Why did you decide to call yourself and your night "Tom Of England"?

It's my DJ name. Inspired by Tom Of Finland and my return to this barmy island.

If we can expect anything from the night, what can we expect?

You're playing "all night long" in the basement… what records are lurking in your bag for such an extended set?

That's a short one, I need a good 10 hours till the deepest shit unfolds; that stuff you just can't rush. But there'll be plenty to warm up with.

Do you think you'll manage to catch any of the live shows from MC Gaff E and My Bad Sister before DJing?

I'll be feeling ‘em through the floor.

Can you explain the thought behind the poster, it's pretty unusual…

I think that was my first and only thought. First thought best or whatever it is. 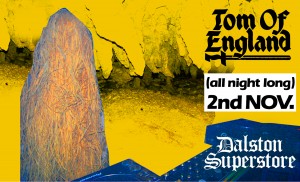 Interest in your Map Of Africa partner, DJ Harvey, seems to have been rekindled here in the UK recently- anything on the cards for you two for 2013?

We're hoping to settle down and have a family.

You've lived in both London and New York- which do you feel has had more of an influence on your music?

Oooh, good one. Well living next door to Dope Jams for a few years was probably the biggest schooling since I was a teen back here. And that was Cambridge. Cambridge then I'd say, being a teen, the '80s, pschobilly, hip-hop and house in the space of a few years, it was strong for a small boy!

What new producers in dance music do you feel are being particularly innovative at the moment?

Hieroglyphic Being, I love Theo P, Wille Burns, who's new? I don't pay a lot of attention to be honest.

What's next for your other main project Rub N Tug?

We're gonna do a reissue project called Back Rub... Nah, just kidding. I don't know! Get together, talk some shit probably... Oh no hang on! Just remembered, we curated a big art show in NYC last summer and we're doing that again in Paris and Stockholm. It was called Do You Thing and it featured all these artists who'd ever come to our jam and got down you know...

Thomas Bullock plays Tom Of England (all night long) tonight at Dalston Superstore with DJ Squeaky and MC Gaff E from 9pm - 3am.