Rory Phillips reunites with Nadia Ksaiba for the first time all year in our basement tomorrow night for the next edition of Say Yes! They’ve promised to lay on a non-stop dance marathon with just the dream-team duo taking over the basement, whilst upstairs sees Ian Robinson and Jamie Bull delving into their bulging record bags and combined immense musical knowledge. We spoke to Rory ahead of the party about all manner of things, including his latest Mixed Fortunes label release, touring the US and sandwich puns…

What was the last concert/gig/clubnight you attended that really blew your mind?

The DJ Harvey 8 hour set last year was incredible, I was there from doors, right till the very end.

What was your personal highlight from your recent US tour?

Playing for my friends at A Club Called Rhonda in LA, it might just be the best regular party in the world. Everyone looks fantastic and is also totally into the music, the kind of crowd that wants to be surprised.

Did you get the chance to do any crate-digging? Any special new records that picked up whilst stateside?

I picked up a lot of great records from the relatively new Co-op 87 in Brooklyn, but haven’t given them a proper listen yet.

What’s next for your label Mixed Fortunes?

The fourth 12″ is coming at the end of the month, which includes a collaboration with L-Vis 1990. After that, two more 12″s and then the label self destructs, as was always the plan.

Gawping at dinosaur bones at the Natural History Museum.

Favourite ever musician guest appearance on The Simpsons?

There’s so many great ones but I will always go back to The Ramones singing ‘Happy Birthday’ to Mr Burns (“Smithers, have the Rolling Stones killed”).

If you could invent a Superstore Sandwich complete with with food/celebrity pun, what would it be called and what would be in it?

Maybe I should just have my own, Mixed For-Tuna?

What’s the best sleeve cover out of all of your records?

Impossible question but looking around I can see Rock It To Stardom by The Legendary Stardust Cowboy which is definitely up there. 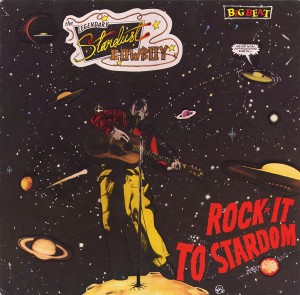 What music (new or old) is getting you most excited at the moment?

What one track have you recently acquired that you can’t wait to play out in our laser basement?

Looking forward to testing out the white label of Mixed Fortunes 4!

Join Rory Phillips for Say Yes this Friday 8th March at Dalston Superstore from 9pm – 3am.

For those who don’t know TrailerTrash is the eastend rave rodeo that has defiantly stamped its filthy mark on London’s underground electronic dance scene over the last 8 years. They’ve showcased some of the best DJ’s around since 2004, when promoters Mikki Most and Dan Glamtrucker teamed up with DJ resident Hannah Holland and started the legendary weekly Friday nighter at On The Rocks, playing an explosive soundtrack of electrofied booty shake, jackin’ techno rave, distorted disco and dirty off-kilter jump up sounds.

Along with fellow resident DJ Ian Robinson the party ran for over 5 years until they finally closed the doors at On The Rocks in 2009, but the TT crew continue to put on big warehouse raves and this summer are lining up to takeover the main dance tent at Lovebox Sunday with party partners GutterSlut. It’s set to be a big day with DJ Hell, Tiga, LCD Soundsystem and Ivan Smagghe headlining the big top tent, which holds up to 5000 people – so no problems if the rains come!

Ahead of the big event we caught up with Mikki and Hannah for a chat about their fave TrailerTrash parties over the years, and which ones particularly blew their minds. So for all those who remember the lost Friday nighters and sweaty warehouse bangers then here are some of the standout moments from the last 8 years of no good fun… it’s been one hell of a ride!

The first massive rave we ever did nearly didn’t happen! We lost the original space at the last minute but luckily managed at the last minute to secure the disused Kwik-Fit garage near the Old Street roundabout. With hardly any power and one strobe light (literally!), about 1000 people turned up and went mental to Ivan Smagghe in the concrete bunker. Everyone thought we had hired a load of smoke machines for it but it was just all the dust in there!

We were given the chance to do a party in a 200-year-old underground medieval prison near Clerkenwell. It was a maze of underground dungeons; an amazing, surreal and very creepy space, but it just worked perfectly, and I remember the atmosphere as being so intense especially when Hannah played the whole place went crazy. Because it was underground people couldn’t find the entrance for hours!

Every Friday at On The Rocks

Possibly the most seedist venue, it was voted the worst toilets in London by Time Out, with dodgy crates in the DJ booth, so that gives you a little idea of how grimey it was. But that was its charm and to watch it grow from a small family of Shoreditch party people to a completely mobbed electric rave over the course of 5 years was amazing. Every week it went off, people really lost there minds in there. The music of 2006 was probably the best year; Oliver Huntemann was a staple sound of the club… big dirty filthy electro techno.

Along with our pals from Horse Meat Disco and Disco Bloodbath this was the biggest outdoor party we have ever done and was actually after Lovebox in 2008. Over 2500 people turned up to some outdoor football pitches next to Liverpool Street (which have sadly now been developed) and it was just brilliant. It was special because it is so hard to do outdoor parties in London because of the sound issues but for that one night we were somehow allowed…. we even had an ice cream van!

We have done several boat parties but the first one stands out when we teamed up with our friends at The George & Dragon because it was just a perfect summer’s day. I will always remember a boatload of trannies sailing under Tower Bridge waving at everyone to the soundtrack from Baywatch!

For some reason we thought it would be a brilliant idea to have a full size boxing ring in the middle of a rave with a DJ battle in it for our 8th birthday. It was totally amazing apart from when the ring broke because there was too many people dancing in it and we had to pay loads of money to a very pissed off boxing coach. Ooops… it was worth it though.

TrailerTrash and Gutterslut will be taking over the main dance big top at Lovebox Sunday this year – for tickets and info visit lovebox.net.

They will also be having a summer rooftop party in August, a series of intimate warehouse events in early September and a massive Halloween rave as well… so keep  ‘em peeled kids…