The Sound Of Thunder Miles Simpson and I go way back.  Well, by way back I mean about three years, which in London time is forever no?  Ok, it’s not, but you know what I mean. Seems like forever (in a good way).

He got in touch via a shared love of venting about old house records and clubs of yore. His Beyond The Stars blog and my Legendary Children site had a lot in common; the vital difference being that he had actually witnessed some of this stuff first hand and our knowledge was gleaned through feverish trawling of the Internet and out-of-print books from Amazon.

When his night Thunder launched two years ago we were down the front with bells on. As it turns out over those two years Miles’ knowledge and passion (along with that of his co-hosts Rick and Joe) have translated into one of the best underground house nights in London.

The night is celebrating its 2nd anniversary this weekend, so what better time to pick Mr. Simpson’s teeming house brain on the seminal clubs that have influenced him and how Thunder is nailing it today…

It is well documented (amongst those that know you) that your visit to Sound Factory in the ’90s had a huge impact. I love hearing your stories despite possibly maybe teasing about it on occasion *ahem*. Tell us about it. Why was it so special?

I guess it was special because it was like nothing I’d ever experienced in London. Not only was it fantastic, it was incredibly exotic too.

There was a simplicity, a rawness, an energy and a communal experience that was unlike anything in London. There was no warm up or guests, just Junior Vasquez, his crowd, his children and they had a special bond.

Some of those parties I’d been to in London had great production, grand stairs cases to the DJ booth, film set props, dress code themes, etc, but the Factory was just a big brick walled warehouse space, iron pillars, a massive sound system and a lighting system based around one, huge disco ball. And that was it, save for a juice bar (the venue was dry), a spotlessly clean chill out area and a drinking fountain.

The music wasn’t that clichéd big room tribal sound, that came later, it was a real mixture of US stuff, MK, Murk, Def Mix, Strictly Rhythm, and maybe slightly harder edged UK stuff like X-Press 2 and the Farley and Heller’s mixes of DSK and Happy Monday’s ‘Stinkin Thinkin’.

I think it opened at midnight but didn’t warm up till about 3am with things really firing by about 6am. At that time in London you were usually asleep on someone’s sofa or on a night bus.

The crowd was raw too. Subsequently the Factory became associated with New York ‘club kids’, all showy in a ‘look at me’ way but in 1992 it was still quite natural, almost entirely gay, very black and Hispanic, with the banji boy look prevalent because people came dressed to dance not pose. There was this thing around 9 or 10am when transvestites, who were seriously these beautiful men, started to have catwalk vogue battles down the side of the dance floor, but it seemed to happen organically rather than in a contrived manner. Nothing about the club felt contrived.

One of the Factory moments that will always live with me was when Junior eased a thunder storm in the mix. Slowly, the rain got louder and louder and eventually overwhelmed the music which gradually disappeared. As this happen the club sank into total darkness, illuminated only by strobes placed across the ceiling that went off every so often in a series that gave the effect of lightning streaking across the ceiling. So I’m standing in the middle this New York warehouse, in the pitch black, in a thunder storm, with 2000 gay men, every person there is screaming and hollering. You could almost feel the rain. And then, after what seemed like an eternity, this vocal cuts across the rain, “It’s gonna be, a lovely day, for you and me” (the at that time, unreleased S.O.U.L. S.Y.S.T.E.M. record, from acetate) and then as the first beat kicking in, every single light in the pitch black club hit the disco ball, and the sun dropped into the room. I’m not doing it justice, it was like an explosion of pure energy, and the place went absolutely bonkers. I’d never seen or heard anything like it and I doubt will again.

I get goose bumps just thinking about it and I must admit, I do like talking about it, mainly because I wish I could go back.

Do you think any of those aspects have translated to the way you do things at Thunder?

I think I run the risk of sounding very conceited if I make any sort of connection between Thunder and the Sound Factory! But if there’s something I learnt from that experience it’s about importance of basics and staying focused on those. The music, the sound and the people.

Ultimately, the nights you really remember, the nights that stay with you forever, are the ones where good music sounded great, you were surrounded by good, like-minded people and there was some sort of communal experience, even if it’s as simple as being a good laugh. Those qualities are not unique to the Sound Factory though, I guess they’ve been present at every great party ever. But that’s the stuff that makes me excited and that feeds my enthusiasm, to the point that it often gets the better of me!

I suppose Junior is also responsible for my penchant for a bit of drama too. I love a dramatic intro or even a period of silence. He did this thing where he worked this long, unreleased intro of the Sounds of Blackness – The Pressure for about 10 minutes at 6am. That was peak time, the dancefloor was heaving and then, 10 mins of accapella gospel. Every time you thought the beat would kick in, it didn’t, the tension mounted, people started actually crying, and then after he’d built the pressure to point you could almost feel it in the air around you, he let it go, the beat kicked in and dancefloor exploded.

Thunder is about to celebrate its 2nd birthday- for me the party’s always had a special vibe. Having DJ’ed for you and been a stalwart attendee I am probably hugely biased, but whenever I’m there I chat to people who have similar experiences and yet it’s their first one and they don’t know any of you lot other than what they’ve heard… What do you think is its magic formula?

I genuinely don’t know but I might be the wrong person to ask?! Luck maybe?! But you’re right, people do seem to like what the parties are about…

As I mentioned earlier, the basics are important to us and focusing on them has worked quite well. The music is what we can influence most of all; we’re all competent DJs, well Joe and Rick are anyway and we all come at house from slightly different angles too, so I think we complement each other.

Beyond that, we put a lot of thought into guests. They have to be booked on the strength of their DJing rather than productions. There’s a balancing act to be done with budgets and who we want, but we try to push that as far as we can. We managed to book John Heckle before he had an agent, convince Sven Weisemann and Patrice Scott to play a 120 capacity venue, and brought Gene Hunt over from Chicago for the first time in 20 years.

We’ve also been lucky with our crowd. From the outset we had people who love the music and have been supportive of the parties. They spread the word, brought friends and friends of friends, and it’s snowballed. We try to make the atmosphere as inclusive possible, but to a certain extent it’s out of our hands, people either like it or they don’t. Fortunately for us the people that do like it are lovely, so the vibe is great. That’s really down to them, not us – they make the party what it is.

The final jigsaw piece is the sound. We lucked out massively when we moved to Dance Tunnel because not only is it a great space, but they are committed to making it sound better than any other club that size in London. We’ve also resisted the temptation to do more regular parties too, which hopefully keeps it feeling like a special event and also saves me from battering everyone on Facebook to death with spam. So yeah, mainly luck. 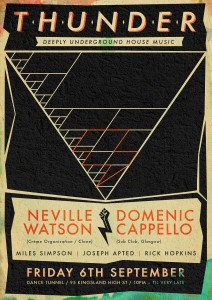 You always have great guests, but actually the three of you are strong as residents too- which is something you mentioned about the New York clubs back in the day also. Would you ever consider going balls-out ‘residents only’?

Residents-only nights are something I don’t think London ever got its head round. Whereas New York was built on that. On that first trip there was Vasquez at the Sound Factory, Tony Humphries at Zanzibar, Knuckles at The Roxy, Troy Parrish at Sugar Babies and before that you had all the disco legends, Levan, Gibbons, Scott, etc. But guest culture seems to reign supreme in London. It would take a brave person to go residents-only but it could be great, I’d love to do it… if anyone bothered to turn up!

Finally, what’s in store for the Thunder birthday extravaganza and Year Three  for you guys?

We’re having two guests play at our birthday party, something we never normally do. Rather than try and get in some big name, who has no existing connection with the party, we like to try and celebrate our birthday parties with our friends. As you know, last year it was the Legendary Children, who provided all sorts of support and encouragement in our first year, this year it’s Neville Watson and Domenic Cappello.

Neville was the guest at our first ever party, he’s well known for his productions but he’s an even better DJ, one of the best we have ever had play for us. He’s also a good friend now and it’s possible that without him kicking me up the backside every couple of weeks, we’d have never got Thunder off the ground. So his influence has played a big part in us being here now.

Domenic has been resident at the Sub Club in Glasgow for almost 20 years now. Not resident in the in the once-a-month way or resident in the fitting it with his touring schedule way but playing there every single Saturday for 19 years. And the crowd up there are absolutely rabid, which is great because the atmosphere is so intense but they are also really demanding, so there’s no room for error. But that’s fine, because Domenic is one of the most gifted DJs I’ve ever heard. When he played for us in July last year the night bordered on being a religious experience, well, for me anyway. Like Neville, he’s become a good friend too.

As for year three, well you’ll just have to wait and see! We love it at Dance Tunnel and as its reputation spreads, we think more and more DJs will want to play there, so we intend carry on trying to twist agents’ arms and shoe horn in DJs wouldn’t ever normally get to hear play in a venue that size. Some of the DJs we’re already well down the road with getting onboard are simply jaw dropping. So, fingers crossed and all that!

Join Miles and the rest of the Thunder team down at Dance Tunnel tonight, Friday 6th September from 10pm to late for Thunder’s 2nd Birthday.