Limelight, Disco 2000, Sound Factory, Club USA, The Roxy, Save The Robots, Jacqui 60's, they were all clubs I frequented. I wasn’t even gay then, but let’s just say the groundwork had been laid out in front of me for my coming out in 2001!

I was in The Roxy when the DJ (I can't remember who) played the first ever play of Vogue by Madonna, and people stood in awe as he announced it over the system and they cheered as it played. That’s something I have never heard or seen in a club ever again.

Also happening at the same time was the whole 'Club Kids' phenomena. It was interesting to watch it grow as we had just left a rave-tastic UK 89/90 and here we were in NYC 90/91 and watching the same chaos and freedom happening there but primarily focused on the gay scene, which took that vibe deep to heart. I actually met Michael Alig and supposedly I met Angel too (as he was host for many of his parties). I hung around a lot of drag queens too as my closest friend at the time Lavinia Co-Op used to take me to clubs; many a time I found myself pushing a huge balloon dress into and out of NYC cabs as we headed out into nightlife. Lavinia is on the cover of the last Soups album dressed as a poodle walked by a Wall St gentleman banker.... as you do. 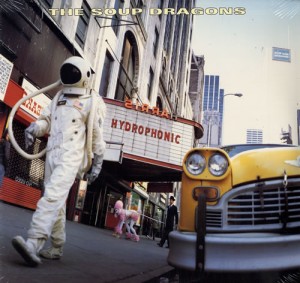 Everywhere in NYC you saw the influence of club land coming out onto the streets through fashion and attitude which to be honest NYC has always been about. When we made the video for Divine Thing with director Nick Egan, who I got on-board as I loved his video for Buffalo Gals by Malcolm McLaren (another homage to NYC) and we went round the city's clubland and got some of the club kids and party people to appear in a kind of homage to downtown NYC. We shot it in a disused warehouse in the Meat Packing district overnight, watching trans* hookers on corners pick up truckers delivering the meat to the stores that morning.

It’s funny, as I write this out now, I think to myself, wow how gay was I for a straight boy?! I just loved it all, the chaos, the hedonism; put it this way I wasn't singing “I'm free to do what I want” on every bloody radio in the USA for nothing…

Don't be afraid of your freedom... indeed.

Crazy thing is, I was told afterwards how ground-breaking it was, as people like Connie Girl were the first drag artists to be given daytime rotation on T.V in the USA which, back in early 90's, was nowhere near as open minded as it is now. Funny that it was shot like Nick shot Buffalo Gals, totally about the streets, the nightlife, guerilla style and all just edited together afterwards, nothing pre-fashioned or contrived, just honest to good love of life at that period, and to me it captures a perfect moment of what NYC was all about then.

Join Hifi Sean and Severino for Up Yours this Saturday 31st May at Dalston Superstore from 9pm - 3am.