Brand new night Inferno takes over both floors of Superstore this Friday! The brainchild of club kids Lewis G Burton and Sebastian Bartz (aka Venice Calypso), the duo will be hosting a floor each with Sebastian in the basement playing techno, and Lewis holding court upstairs playing pop and flanked by east London's IT drag queens. Ahead of the party we caught up with Lewis to find out more about what to expect

Okay we have to talk about the chicken suit first. How did that idea come into its frankly a bit nightmarish reality?

It’s a project I worked on with my friend Victor Ivanov, through coincidence we ended up being in three exhibitions with a month. During the final exhibition (Platform Six) we talked about making a mask out of chicken skin as an experiment to see how it would look. It turned out very well and we thought ‘fuck it’ lets do the full body. After a six month grueling process of Victor sewing chicken skins onto my body FLESH was born.

How did you feel about the press furore over it? You had publications like The Daily Mail and The Mirror all writing about it…

We carefully orchestrated everything so it would go viral. It was an intended part of the piece to create an online dialogue so the public who would not normally be exposed to art (especially art that’s quite extreme) and see what conversations would arrive. If anything I couldn’t help but laugh at all of the comments that were being made, Victor and myself would call and text each other funny slurs written about us. But there was around 1 in every 10 people who would get it and engage with the piece and actually figured out what it was about which obviously made us happy that we were doing something right! 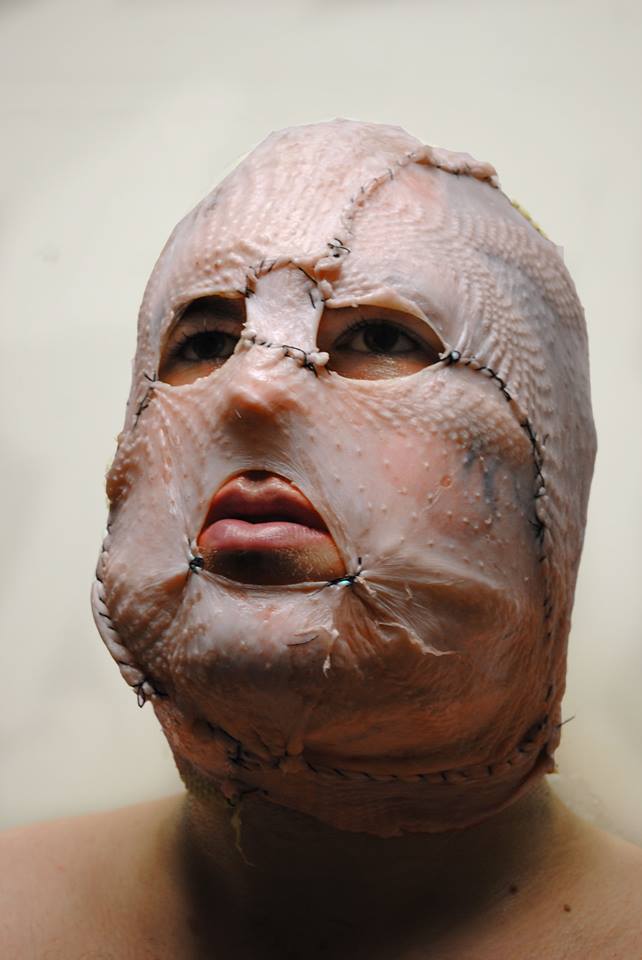 What made you want to get into drag and performance art?

I always admired people like Grace Jones and Leigh Bowery and it fascinated me how they used there body and gender so fluidly. So one day I thought I’m going to move to London and try doing this myself. Performance Art seemed a natural route for my work as I was performing to a camera to take photos, I remember being 18 at college and making this fake vagina and doing a photo shoot. Best. Day. Ever.

My favorite artists are ORLAN, Franko B and Günter Brus. They all have extreme relationships with their bodies that I like and can relate to. I also adore drag culture and have so much love for Divine and what I love about her is how she became a grotesque caricature of what drag was back then. I wouldn’t class myself as a drag queen although there is a lot of influence from drag culture; it’s why I’m always Lewis G. Burton.

What draws you to the grotesque?

I think the grotesque is very subjective in the same way that beauty is. I just think there’s something really beautiful, raw and organic about the grotesque.

How did your series of nights CULT come into being?

I became bored and jaded with what was going on already so I wanted to do something different with CULT. I wanted to create a platform for the next generation of performers, musicians, drag queens, freaks and misfits to give them a voice and a stage to act on.

What outside of music and performance art inspires your work?

My friends and the community.

INFERNO is the collaboration between Sebastian Bartz (Venice Calypso) and myself. We wanted to curate a night of fun and debauchery that would leave a pleasant taste in everyone’s mouth. It’s going to be the marriage of the good, the bad and the ugly. Highbrow art and lowbrow drag. Pop with techno.

If you had a time machine and could visit any dance floor anywhere/anywhen when would you want to go dancing?

What can we expect from this Friday night?

Eight drag queens dancing on the bar.  The dirtiest, darkest techno. A very drunk Smiley Vyrus. A man walking around with an iPad on his head. And Britney.

If you were mentoring a young queen in the art of East London nightlife what one piece of indispensible advice would you give out?

Don’t listen to me! Hahaha!

Join Lewis this Friday 27th February for Inferno at Dalston Superstore from 9pm - 3am.