Ahead of Little Gay Brother's Lovebox extravaganza and afterparty right here at Dalston Superstore, we asked man behind the fun Clayton Wright to run through his fave queer festival acts...

I love a festival. For me it’s where I can chuck a load of glitter over my face and go feral for a few days. Oh and I might see a band or two. This is my list of AMAZING FESTIVAL ACTS YOU SHOULD SEE BEFORE YOU DIE GIRL!

In 2004 I was in love with Jake Sheers. I loved his hair, his face, his music and his arse in tight jeans. I stood at the back of the festival and I desperately wanted to get to the front. ‘A friend' was peeing in a cup because the toilets were crazy busy. Before he knew what was happening my friends and I grab him by the scruff of his neck and push him forward. He peed his way all the way to the front of the stage. I was front row to stare at Jake. Unfortunately standing behind us were a lot of angry chavs now covered in piss. Soz V.

I saw Róisín at a little festival called Bloom. It rained and there must of been only about 1000 people there max. It’s impossible to find a clip of Róisín at that festival but she was amazing. She had a bag of clothes and hats at the side of the stage and kept rushing to the edge of the stage to change her costumers herself. I loved how incredibly low budget the show was but her performance was world class and so were her hats.

Florence and the Machine - 2009 Bestival

I was lucky enough to hang out with Flo back stage at Camp Bestival one year. I was later told she was later found naked in a someone’s garden off site. She’s never confirmed this, but she does still owe me 20 quid.

The woman hula hoops as she sings????? What more could you ask for? I told so many lies to get back stage that year to meet her that I’m surprised I don't have boils on my tongue, but who cares it’s GRACE JONES!?????

“Miss Honey, Miss Honey” This clip is just hilarious and reminds of what an incredible year for gay artists to showcase at Lovebox in 2010. This is definitely one act you should have a gay love affair with. I definitely have... but that’s another story. Andy Butler is playing with us at Bearded Kitten’s Colosillyum stage this year at Secret Garden Party.

This festival is my spiritual home. 2012 was the first year we started the gay bar at SGP and Blondie was headlining the main stage. SGP has always been an eclectic mix of people and music. As you watch this clip you see a crowd covered in feathers, sequins and glitter. We love SGP and we love Blondie. See you at the Gay Bar.

The great thing about seeing any legendary gay icon or band is that you know in amongst at least the first 100 people near the stage is a hottie ready and willing to cop off with you whilst you both hold hands and sing along to ‘I'm Coming Out’. I need to do this before I die. If Diana does a UK festival you can find me always by the left hand speaker, boys.

I love these guys so so much. They still rock out in sequin costumes. Without a doubt on my list of gay festival acts to see before I die.

She sings, plays guitar and even raps. What could be gayer than watching the Queen of Dollywood surrounded by hundreds of trannies dressed up in cowboy hats immolating her highness?

OK so Elton is gayer than Dolly, but only just. You can catch Elton and our mate Bright Light x2 on tour in the UK this summer. 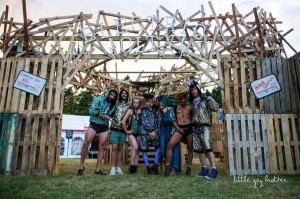 Catch Little Gay Brother at Lovebox this weekend, 18th and 19th July at the washing machine stage in the Bearded Kitten Mansion and at ET Phone HOMO at Secret Garden Party 24th to 28th July.