Glasgow based house producer and DJ Ooft! aka Ali Herron hits up London town next weekend to join us in Dalston for Ubermax. In addition to making his own deep house, Ali also runs the small UK label Foto Recording that's previously released acts such as Cole Medina and former Ubermax guest Medlar.

Known in part for his work with fellow Glaswegian, The Revenge, Ooft! has been steadily gaining more of our attention, and even recently appeared on one of our favourite NY radio shows, Beats In Space. We caught up with the man himself to find out what we can expect from his laser basement set, his feelings on his hometown and more...

What's in your record bag for Ubermax?

I always pack a mixture of house, disco, soul, and some slower stuff so that I'm prepared for most situations. At the moment I'm particularly feeling tracks from Deetron, Lauer, Daniel Solar, Nick Nikolov and more. There are loads of great tracks kicking around at the moment.

Why did you decide to set up your own label, Foto Recordings and what's the label's defining feature?

The main reason I set the label up was simply as a vehicle for releasing my own music. As time has passed I've ended up putting out music from other people but mainly close friends of mine. As such there is no defining feature... unless you count ropey artwork! 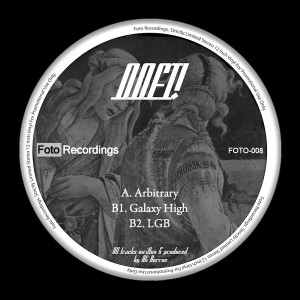 What are your favourite UK labels (other than your own!)?

UK wise here are a few super-consistent favourites: Wolf, Delusions of Grandeur, Use of Weapons, Firecracker, House of Disco, Seven Music, Extended Play, and Disco Deviance. Pretty much every release always has at least one track I really like and end up playing loads.

Anything exciting due on Foto for 2013?

Absolutely nothing! My main aim was to get four releases out over 2012, which should hopefully happen when the next OOFT! EP comes out at the beginning of December. After that I haven't made any plans for the next phase. We'll see which way the wind blows!

You were recently on renowned NYC radio show Beats In Space- how did that go and are you happy with the show you did?

It was great fun, really easy too considering it's a long time since I've done any live radio. Tim Sweeney is a consummate host. I thought I was only on for an hour before we started but it was 90 minutes so I managed to get plenty of my favourite tracks played and am pretty happy with the results.

Who are your all time house heroes?

I could reel off the usual suspects like Lil Louis, Romanthony, The Nightwriters etc but my biggest influence has definitely been two DJs from Glasgow - Harri & Domenic. They have played together every Saturday night at the Sub Club since 1994 and have been my inspiration and education in all things house. I think most artists from Glasgow would be hard pushed to say anything different.

Describe your relationship with The Revenge...

We're really good mates with a shared love of music. He was my main production mentor and helped me to learn the basics of music production as I was a DJ with no clue how to do anything! We worked together as OOFT! initially a few years ago before he got too busy with his other projects, but luckily by that point I'd kinda learned enough to continue working on my own We've recently started DJing together a lot more again after a long time time flying solo with our monthly Instruments Of Rapture parties back in Glasgow (with Craig Smith from 6th Borough project too).

Where do you go out in your home of Glasgow? What venues and nights are really doing it for you at the moment?

I've said this in other interviews before but we're really spoiled for nightlife in Glasgow considering its small population. There are five or six solid underground nightclubs, of which the Sub Club is my favourite (because it's the best!). You can basically take your pick most weekends as there will be three or four decent nights on every Friday and Saturday.

Why do you think Glasgow has got such a good dance music scene?

It's a hard one to pin down but I think the city has traditionally had the weekend socialising scene for many generations where young people would go out to drink and dance the night away and forget about their jobs looming on a Monday morning. This tradition allied to disco, house and techno (and all the newer offshoots) makes for a very potent combination. When it goes off in Glasgow, you know all about it!

What made you want to start making music?

It started off the back of DJing really. I had some favourite older records which I found very hard to mix as they didn't fit in with the rest of my music. So I started experimenting with basic cut and paste editing of a song so I could get it into my set. Fast forward eight years or so and it has all just grown organically from there!

And what one song brings you instant nostalgia for your childhood?

Any track off Tina Turners greatest hits, Chris Rea's New Light Through Old Windows or Survivor's Eye of The Tiger off a compilation called American Heartbeat. These were the main cassette tapes in my folk's car stereos! Heady days.

Ooft! joins us for Ubermax on Friday 23rd November from 9pm - 3am with Sigmund K and Eugene & Mortimer.