Ahead of this Sunday's special fundraiser for the Peter Tatchell Foundation over in London Fields, we spoke to the man himself to find out what the Foundation's aims are and what we can do to help LGBT issues around the world...

What are the Peter Tatchell Foundation current priorities?

What's the best thing we can do to help LGBTQ people around the world facing oppression?

We need to show solidarity with LGBT people worldwide. They are part of our queer family. Please join the protests against homophobic persecution in Jamaica, Russia, Cameroon, Nigeria, Iran and Uganda. I would also ask people to lobby their MP via the website: www.writetothem.com. Ask your MP to protest to the London ambassador of homophobic countries. Request your MP to press the government to switch foreign aid from anti-LGBT governments to local aid agencies that don't discriminate.

What's the most dangerous situation you've ever put yourself in?

Getting beaten unconscious by President Mugabe's henchmen in Brussels in 2001, when I tried to do a citizen's arrest. But also being bashed by neo-Nazis when I attended Moscow Gay Pride in 2007. Both times I was in fear of being killed. I've still got some minor brain and eye damage as a result.

How effective do you think armchair activism is?

Clicktivism has a role. Mass online petitions by groups like All Out can be very effective in pressuring governments. They don't always work but sometimes they gets results. The e-petition about Alan Turing persuaded the government to issue an official apology for the way he was treated.

Do you think LGBTQ activism in London is being rekindled of late and if so what's promoted this?

Appalling abuses of LGBT people in places like Russia and Uganda have reminded people that that the global battle for queer freedom is far from won - and this realisation has got them activated.

How far have we got to go here in the UK to reach equality and what is threatening it?

All major legal discriminations against us have been repealed in the UK - at last! But faith organisations are still allowed to discriminate in certain circumstances. They have exemptions from the equality laws that apply to everyone else. LGBT refugees from homophobic persecution are often denied asylum. Sex education and HIV education in most schools is woefully inadequate. Gay bashing violence and homophobic bullying in schools is still far too prevalent.

Do you ever go out dancing and what is your favourite track right now?

I love clubbing but rarely get a chance to indulge. My favourite track is a bit old: Tinie Tempah's Invincible. It's great love poetry; plus I interpret it to express my belief that LGBT people and our liberation struggle are invincible.

Who are your heroes?

What's been the proudest moment of your life?

The OutRage! campaign against police harassment of the LGBT community in the early 1990s. We won police reforms that saved thousands of gay and bisexual men from arrest and conviction.

And what are you currently reading?

Forbidden Forward - The Justin Fashanu Story by Nick Baker. You can find out more about it here: www.justinfashanustory.com

Join Peter this Sunday 1st September for Cold War - The Peter Tatchell Benefit Party at The Pit near London Fields from 2pm to late.
For more information about Peter Tatchell's LGBT campaigns and to make a donation:
www.PeterTatchellFoundation.org 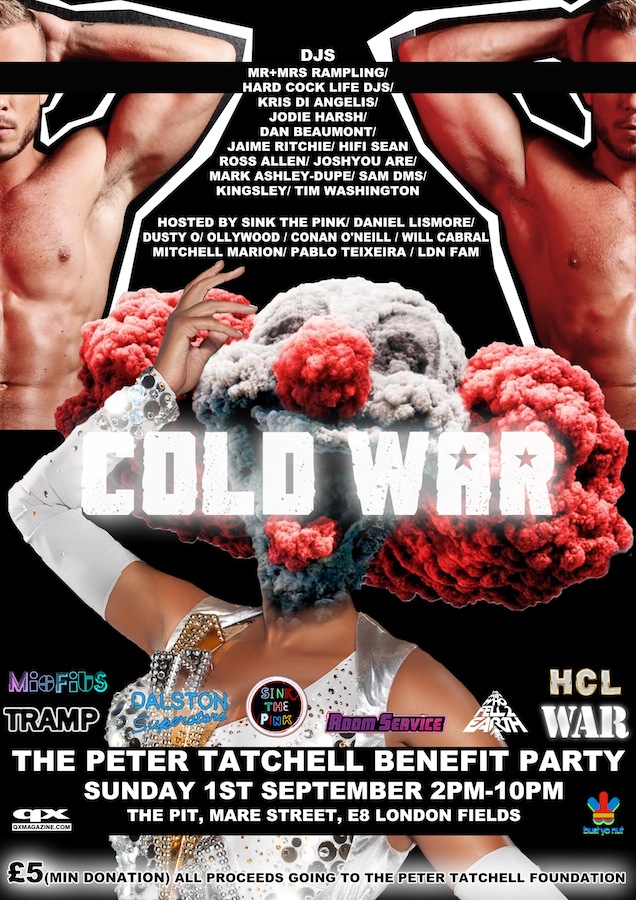