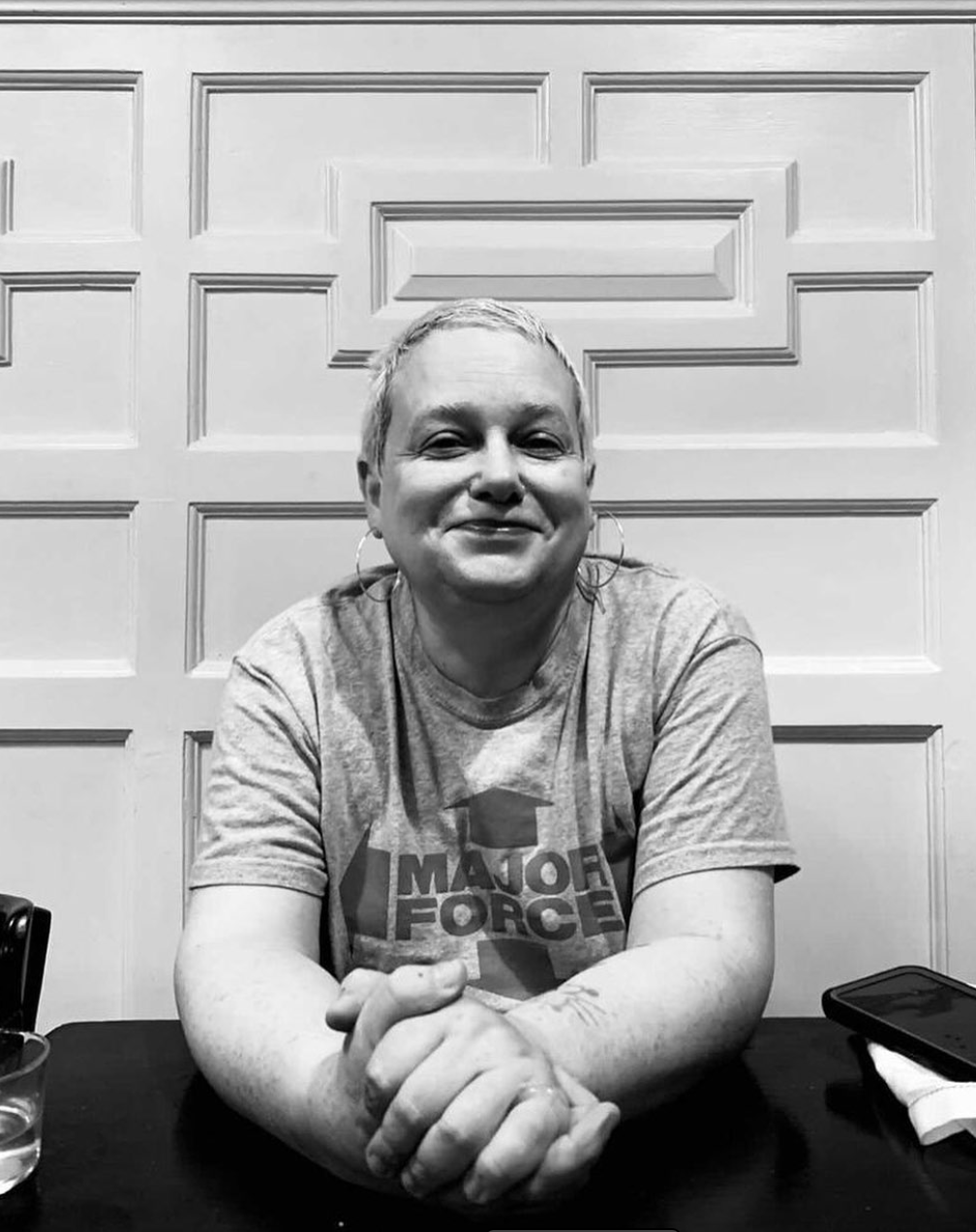 Long-term friend, lover and hero of Dalston Superstore Jaye Ward makes her much-anticipated return to the lazerpit for Pumping Velvet this Saturday! Few DJs have Jaye’s breadth of experience under their belt, starting out on the dancefloors of Dirt Box, the Mutoid Waste parties and The Hacienda, and arriving behind the decks of many legendary (and sadly, now lost) venues such as Golden and End, plus innumerable underground, back-room and darkroom illegal raves of the 90s and 00s. The last few years have seen the world at large recognise her dedication and obsessive love for the weirder, wonkier corners of the electronic dance music universe, and have landed her festival shows from Field Maneuvers and Homobloc to Croatia’s Love International and beyond. Pumping Velvet promoter Sam Ashton caught up with her to chat dance music history, the return of the chillout space, and the importance of queer dancefloors.
Jaye, you’ve played at Superstore many many times over the years. Can you tell us about some of your favorites?
Love the Superstore. They really gave me my second wind. Real family vibration. Umm… loads of fun nights! The fundraisers have all been really good. Busy with people who can deal with total pop right through to fast bangers downstairs. The Octo Octa night before covid was ace – played lots of cure ball bangers and some VERY deep house. Remember it going OFF!!
As well as having an incredibly deep knowledge of dance music history you also play lots of brand new music. When approaching a gig how do strike a balance between old favorites and fresh tunes?
Haha!! Its because im REALLY old! I like to read the room and do my homework with knowing what people will be into. New stuff is super important as you want to play things that the modern ear gets.. classics and older stuff, especially on my USB keys are usually stuff that I KNOW will get crowds going.
The regular thing I do with Chris (who first booked me for Superstore) in Bristol – PLU – has changed shape music-wise and we constantly test stuff out to see where we can go – it helps that we have a ten year long relationship with the PLU punters who come to it all the time. So I’m playing all sorts of different nights with all sorts of different genres/styles/intensities which means I’m constantly trying to keep the crowd in the moment. Old faves are ace for that whoosh factor but its the new stuff that keeps people locked in.

It seems like we’re seeing the slow return of the chillout room to raves. As a 90s veteran and lover of ambient music what do those spaces mean to you?
Yeah, I’ve been pushing this for a LONG time now. Modern young punters haven’t had chill out rooms at raves, just a smoking area, so they don’t know what to do in these environments. They sort of go, ‘What’s happening?!’ They are used to four or five rooms of the same thing. I’ve been doing the chill out roon at Chapter 10, which I’m hoping will get people back into what happens and maybe even get people to come specifically for it. I’m pre-acid house and saw the idea of the chill out flourish as people started to heavily rave. Places like Land of Oz, Megatripolis, Sunday Best and Whirlygig were essential in this. I really think chill out rooms as part of larger parties could get a whole bunch of ravers old and new back to going out again. Chill outs were the places where people could kick back, network, chat, even dance, haha!
Everyone is going on about phones and people talking on the dance floor at raves… Well this is where that kind of socialisation happens. Really think we are due these things coming back. My radio show on Netil Radio veers between outright wonkiness through to bangers, but the bi monthly one I do for Mutant Radio in Tblisi is definitely a more chilled, ambient, world blends. Four decks and lots of effects and voice overs. Real chill out.

Why is it that queer spaces such as Superstore are so important to our community? What’s different for you about playing to a queer dancefloor?
God… a queer dancefloor is the future. It’s also how the past was too. Somewhere in between, clubbing and going out dancing became super straight. Queer dance floors like Superstore and nights out like PLU, Adonis, Big Dyke Energy and what the Lezzerquest lovelies are doing are home to a whole raft of disenfranchised people who feel comfortable to be themselves there. It’s impossible to have 100% safe spaces but QUEER run events and parties are all about that safer space, making people feel at home and as safe as they can be. To be honest, queer spaces are way more about the legacy of The Loft and Paradise Garage than any of these straight nights at places like Ministry of Sound or Printworks. It’s incredibly important to not just be inclusive and as safe as possible – it’s also super important that the punters see themselves reflected in the artists, DJs, promotors and party workers. We are seeing that now with queer and trans* DJs becoming so prominent in the culture at large.
Finally, could you share with us a couple of tunes that might make an outing at Pumping Velvet?
God, still not got that together yet (don’t worry I will!!) I’m gonna be playing a few of mine, but here are six things that have been getting me going in a pumping, banging, basement type of moment lately…

Catch Jaye Ward at Pumping Velvet this Saturday from 9pm-3am at Dalston Superstore! 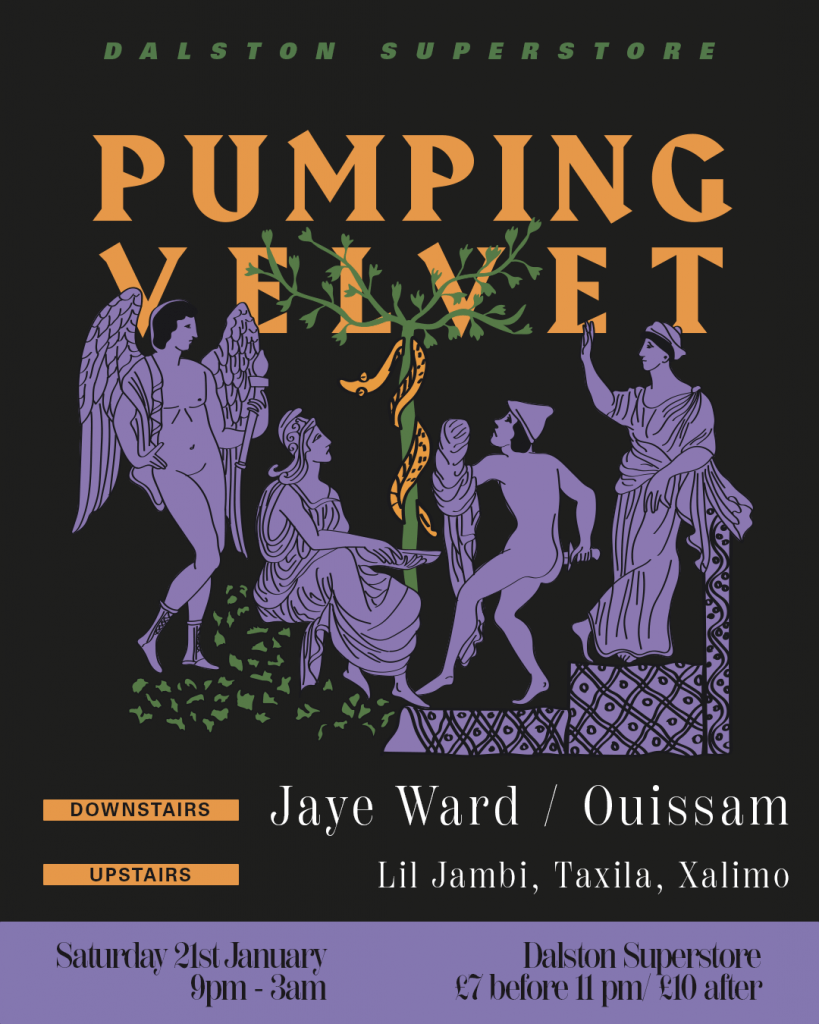